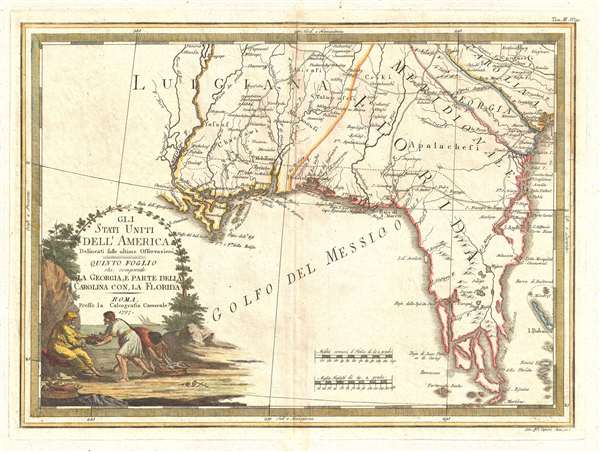 Decorative early map of the United States Southeast with Florida as an Archipelago.
$1,250.00

A spectacular 1797 Giovanni Maria Cassini map of the southeastern part of the then fledgling United States. Centered on Pensacola, the map covers rom the Mississippi River to the Atlantic Seaboard and from Fredericksburg to the Florida Keys, including the modern day states of Florida, Georgia, Alabama, and Mississippi, as well as parts of Louisiana and South Carolina. Florida is illustrated in archipelago form, as was coming at the end of the 18th century. Being a somewhat large scale production, the map offers excellent information on the interior, including the deportment of American Indian tribes and villages. A highly decorative title cartouche appears in the lower left quadrant and features a fisherman sharing his haul with an elderly man.

Cartographically Cassini derived this map from the 1778 Zatta 12 sheet revision and expansions of the John Mitchell's seminal 1755 map of the eastern part of North America. Cassini published six maps of United States regions based upon Zatta's work, of which this is map no. 5. This work was published in Cassini's 1797 Nuovo Atlante Geografico Universale. Today all maps from this series are highly sought after for their exceptional beauty and fine engraving.