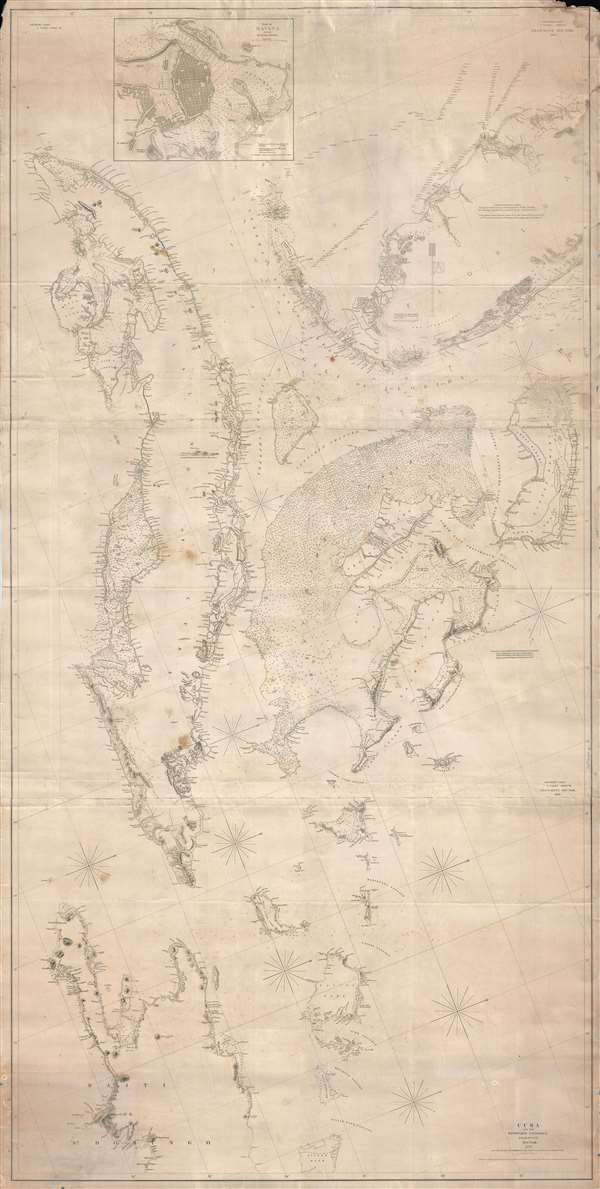 Unusually oriented and enormous nautical chart detailing a voyage through the Bahamas to the Dry Tortugas.

An enormous and expansive 1844 - 1857 nautical chart or maritime map of Southern Florida, the Bahamas, and Cuba. Curiously oriented to the northeast, this sprawling map covers from central Florida in the vicinity of Tampa Bay, to western Hispaniola (Santo Domingo, or modern day Haiti), including all of Cuba and most of the Bahamas. Blunt designed his charts to be joined to create massive maps custom tailored to each voyage. The present chart is no exception, being in fact a joined composite of three charts: Blunt's United States Southern Coast Sheet VII (1844), Blunt's United States Southern Coast Sheet VIII (1844), and a slightly newer chart, Cuba and the Windward Passages (1857).

The middle panel or sheet focuses on central Cuba and the Bahama Islands and is exceptionally rich in sounding and nautical detail, specifically on the Grand Bahama Bank. This map contains pencil note clearly referring to navigation between the Bahama Islands and The Dry Tortugas. The purpose of the voyage is unclear, but the map specifically identifies a location just north of the Dry Tortugas as, seemingly, the terminus of the voyage.

The lower panel, or eastern sheet, dated in 1857, was presumably added later, but meshes perfectly with the two 1844 charts. It details eastern Cuba and the western part of the Island of Hispaniola or Santo Domingo - a region roughly equivalent to modern day Haiti.

This map is owned jointly by Geographicus and Vetus Carta Maps.

Good. A couple of minor verso repairs. Backed on blue paper. Minor loss to upper right and left corners, not affecting printed map. Even overall toning. Slight staining and creasing.
Looking for a high-resolution scan of this?