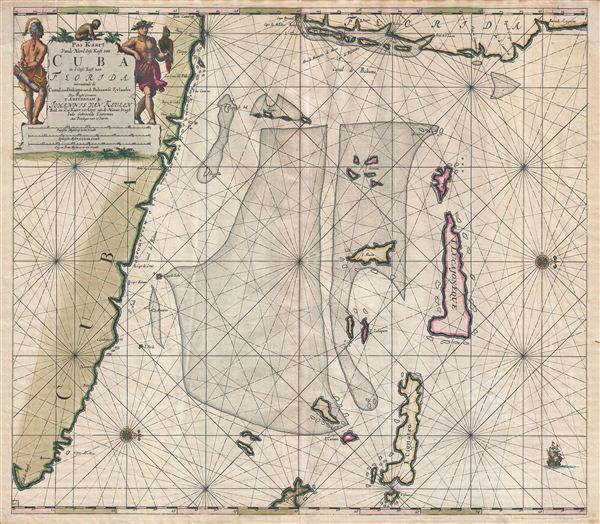 A fine old color example of Claes Jansz Vooght and Johannes Van Keulen's 1687 nautical chart or maritime map of the approaches to the Straits of Florida. Oriented to the west, this map covers from the eastern tip of Cuba to the Bahamas and from Florida to exuma, Bahamas. This is the first maritime chart to focus in such remarkable detail on the southeast coast of Florida. Portions of the Florida coast covered include the region from West Palm Beach to Miami and the northern Florida Keys. Several of the northern Florida Keys are named, including Key Biscayne (Cayo de Biscambos). Cape Canaveral is also noted (Cabo de Canaveral). A decorative title cartouche featuring New World Fauna and stylized American Indians appears in the upper left quadrant.

Cartographically Van Keulen derived this map from the 1675 map of Arent Roggeveen, Pascaerte Van 't Canael de Bahama as well as from Hessel Gerritsz's 1631 chart. The cartographic work of compiling this map is attributed in the title to Claes Jansz Vooght, a known partner in the Keulen firm.

<h6>Golden Age of Caribbean Piracy (c. 1650 - 1730)</h6>From a historical perspective, this map appeared at the height of the Golden Age of Caribbean Piracy (c. 1650 - 1730) and nowhere were pirates more likely to strike than in this narrow passage between Florida and the Bahamas. Dutch pirates operating with the support of the Dutch West India Company dominated the 17th century until the rise of English piracy in the 1690s. Roughly three years after this map was issued English (and many other) pirates began establishing themselves in the Bahamas, which were ideally situated to raid Spanish treasure galleons on <i>en route</i> from Havana to St. Augustine, their last stop in the New World before veering to open water for Europe. By early 1700s, Nassau had been declared a 'Pirate Republic' and more than 1,000 pirates had established themselves in the region. Despite its somewhat inaccurate presentation of the Bahamas, many pirates would have found this map useful, making it a true pirate's treasure.

Van Keulen issued this map in three states, of which this is the second. The first state appeared in 1684 and is identifiable for its lack of page number. Subsequent states appeared in 1687, which corresponds to the present example, and c. 1695. This map was published in both Van Keulen's Zee-Fakkel and his Zee-Atlas, which were published congruently to about 1702.

Very good. Repaired corner, upper left quadrant. Minor verso reinforcement on centerfold. Large rip from bottom margin extending about 13 inches, repaired with archival tissue. Some age toning. Like most examples of this map, there is some slight discoloration around the original centerfold due to variance between the acid level in the map itself vs. the acid content of the atlas tabs.