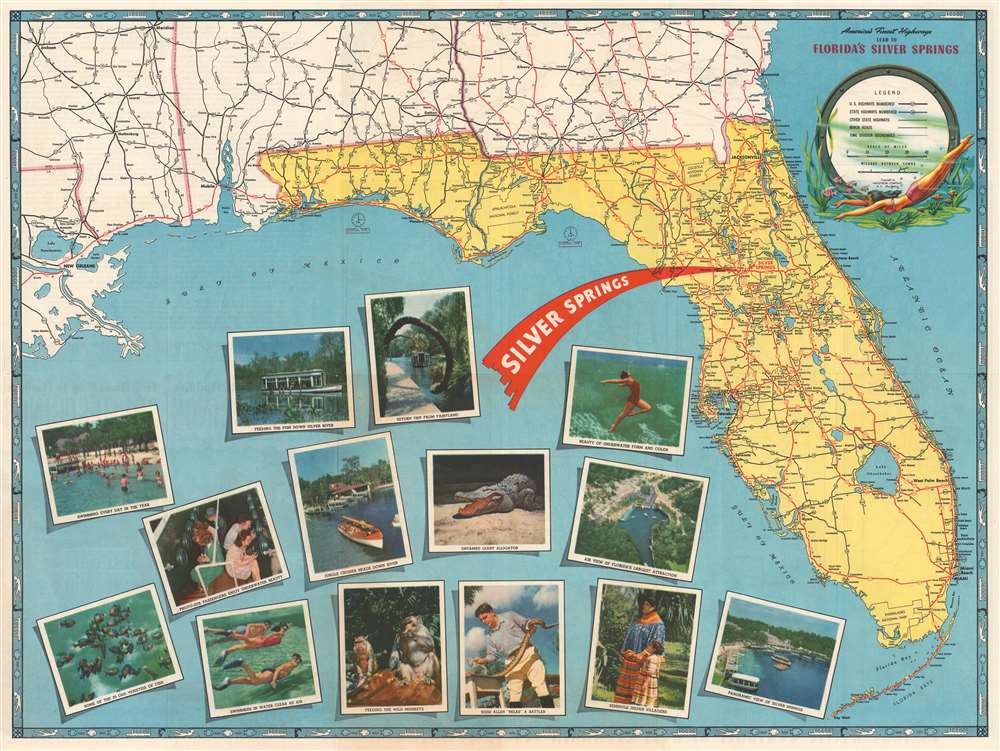 Silver Springs - the largest tourist attractions in Florida in the 1950s.

This is a 1952 Hagstrom map of Florida. Created as a promotional piece for Silver Springs, a tourist attraction outside Ocala, Florida, a large red 'arrow' emphasizes Silver Springs' location in central Florida. U.S. highways are illustrated in red and four highways pass through Ocala, highlighting how easy it would be for travelers to stop at Silver Springs on their way to their final destination or on their way home. Gorgeous color photographs increase Silver Springs' appeal and promote its crystal-clear water, glass-bottom boats, reptile house, and its rhesus macaques. Throughout the 1930s and 1940s, billboards and other advertisements appeared along highways around the country proclaiming the wonders found at Silver Springs, pointing the way, and telling motorists just how far it was from where they were to this paradise. By the 1950s, Silver Springs was the largest tourist attraction in Florida. Today, the 'attraction' is now part of Silver Springs State Park, but the glass-bottom boats (and the slightly dangerous monkeys) still beckon thousands of visitors every year. A wonderful pictorial border, consisting of illustrations of fish, a woman swimming, and a glass-bottom boat, surrounds the entire map. Five maps on the verso detail the highway connections between locations throughout the United States and Silver Springs.

This map was created by the Hagstrom Company and published by Ray, Davidson, and Ray (the owners of Silver Springs) in 1952. We have been unable to locate any other surviving examples of the present map.

Very good. Exhibits light wear along original fold lines. Exhibits some toning. Road maps on verso.
Looking for a high-resolution scan of this?