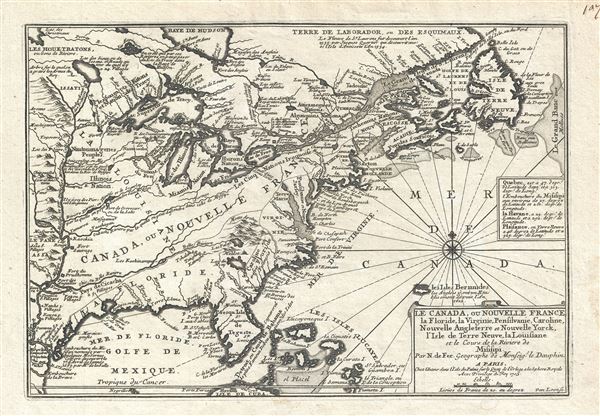 This is a 1705 map of North America east of the Mississippi River by French cartographer Nicolas De Fer. Centered roughly on the Great Lakes and the Hudson Valley, this map depicts from the Mississippi River east to Newfoundland and the Grand Banks, and from the Hudson Bay to Cuba and the Bahamas. The focus of the map is, as the title suggests, French dominions in America as exemplified by Canada and Nouvelle France, including La Louisiane (Louisiana) or the Mississippi Valley.

De Fer prepared this map at a time of nascent French power in North America. Without a clearly declared heir, the death of the King of Spain created a power vacuum in both Europe and the New World and, coincidentally, the French crown was strategically positioned to capitalize in both arenas. In Europe, the French supported the claims of King Louis XIV's grandson, Philippe, Duc d'Anjou, for the Spanish throne. In the New World, the explorations of La Salle, d'Iberville, and others, presented an opportunity to encroach upon both Spanish and English claims in North America.

For the European elite of this period, the New World was more a concept than a reality. While many monarchs had dreams of vast New World empires, few had the resources and manpower to make them a reality. Instead, claims were made based upon 'Right of Discovery' where knowledge of a region was tantamount to political occupation. By exploring inland and establishing clear maps and trade relations with local indigenous groups, the French Minister of Naval Affairs, Pontchartrain, recognized he could establish at least nominal control over much of North America.

Cartographers followed suit, often tailoring maps to the goals and values of their nation. At present, we have a perfect example. De Fer, in his capacity as official Geographe de Monseigneur Le Dauphin had full access to the most up-to-date French records regarding the discoveries of La Salle, d'Iberville, and their contemporaries in the lower Mississippi Valley. And yet, he misplaces the source of the Mississippi, situating it in an obsolete location far west deep in Spanish claimed territory. By doing so, he successfully expresses French claims to Spanish territory dangerously close to the productive Spanish silver mines in Mexico. Moreover, he identifies a series of fortifications all along the Mississippi, including Fort Prudhomme, Fort Sauvage, Fort Crevecoeur, Fort Miami, Fort Frontenac, and others. Though in many cases these were little more than abandoned stockades, from the perspective of Europe's empowered elite, they expressed both occupation and dominance. The same might be said for the pointed identification of various American Indian villages, including several villages near the headwaters of the Ohio River, which are suggestive of strong trade, alliances, and territorial domination. Both the Ohio and the Wabash, incidentally, connect with the Mississippi far south of their actual convergences.

In the same vein, De Fer also restricts English colonial claims to a narrow strip east of the Appalachian Mountains and following the coast roughly from Penobscot (Maine) to Charle Fort (Charleston, South Carolina). For the region labeled Carolina itself, roughly modern-day Georgia and South Carolina, de Fer has reappropriated French claims dating to the failed 1565 French attempt to colonize this coast under Rene Laudonierre, In doing so, De Fer denies English claims to the region and ignores the realities English occupation and settlement there.

All five of the Great Lakes are fully within the sphere of French influence and fortified on all sides with missions, settlements, American Indian allies, and forts. River passages and narrow portages suggest easy communication between the Great Lakes, and the Illinois, Wabash (Oubache), and Mississippi Rivers, thus linking established French settlements along the St. Lawrence River with their new territories in Louisiana.

This map also has some additional cartographic features of considerable interest. There are two lakes of note in the upper left quadrant, one labeled 'Lac du May', (more commonly known as 'Lacus acuqe dulcis', as identified on many other maps), and a second identified as 'Lac Palasi' (but more commonly known as 'Apalatcy'). Both of these lakes make their first appearance on the De Bry / Le Moyne map of 1591. The larger of these is represented as the source of the River May. In that work, Le Moyne correctly mapped the River May (St. John’s River, Florida) in an inverted 'V' form, first heading north, then south to meet with a large inland lake (in all likelihood Lake George or one of the other great inland lakes of Florida). Hondius, on the other hand, maps the course of the May heading to the northwest, thus relocating the 'Lacus Aquae Dulcis' far to the north. This error can be understood in terms of magnetic variation, temperature issues associated with isothermal lines, and navigational errors related to the confusion of the star Asfick with Polaris.

While Le Moyne correctly located the mouth of the River May at 30 degrees of latitude, Hondius maps it between 31 and 32 degrees. This led to an incorrect association of the River May with the Savannah River. Thus, while the real River May dips southward, the Savannah River heads almost directly NW into the Appellation Mountains, forming the modern southern border of South Carolina. Hondius, no doubt taking his cue from navigators who rarely trekked inland, therefore rerouted the May River to flow from the northwest. Without an accurate picture of the interior, Hondius followed Le Moyne’s example and translocated the great freshwater lake to the north. Others have speculated that the Le Moyne’s River May is in fact the St. John’s River, and that the 'Lacus Aquae Dulcis' is in fact the Okefenokee Swamp - however, this argument runs counter to most scholarship. Due to the pronounced influence of the Mercator-Hondius firm in Europe during this era in the development of cartography, most subsequent cartographers, including de Fer, followed their lead.

Lake Palasi (Apalatcy), further to the north, also merits some discussion. Both the De Bry / Le Moyne and the Honduis / Mercator maps of this region depict this lake originating from a great waterfall plunging from between a cleft in the mountains. A theory, proposing that the waterfall present on the De Bry / Le Moyne and the Hondius / Mercator maps may have evolved from early indigenous reports of Niagara Falls, appears to be doubtful. Be that as it may, De Fer is here one of the first to depict this lake without the hallmark waterfall. Most subsequent cartographers abandoned the lake altogether. What is exceptionally curious here is that he not only retains the lake, but attaches it to the Ohio River, thus again arguing for French claims to a potentially lucrative region with easy river access to the Mississippi Valley. Mountains placed to the north and east of the lake further suggest inaccessibility to British colonists in nearby Virginia.

This map was drawn by Nicolas de Fer between 1699 and 1701 and engraved by Van Loon in 1702. We are aware of two states: 1702 and 1705. With the exception of the date, which has been updated for the 1705 edition, we have been unable to identify any cartographic changes. De Fer published this in his L'Atlas Curieux ou Le Monde.

Nicholas de Fer (1646 - October 25, 1720) was a French cartographer and publisher, the son of cartographer Antoine de Fer. He apprenticed with the Paris engraver Louis Spirinx, producing his first map, of the Canal du Midi, at 23. When is father died in June of 1673 he took over the family engraving business and established himself on Quai de L'Horloge, Paris, as an engraver, cartographer, and map publisher. De Fer was a prolific cartographer with over 600 maps and atlases to his credit. De Fer's work, though replete with geographical errors, earned a large following because of its considerable decorative appeal. In the late 17th century, De Fer's fame culminated in his appointment as Geographe de le Dauphin, a position that offered him unprecedented access to the most up to date cartographic information. This was a partner position to another simultaneously held by the more scientific geographer Guillaume De L'Isle, Premier Geograph de Roi. Despite very different cartographic approaches, De L'Isle and De Fer seem to have stepped carefully around one another and were rarely publicly at odds. Upon his death of old age in 1720, Nicolas was succeeded by two of his sons-in-law, who also happened to be brothers, Guillaume Danet (who had married his daughter Marguerite-Geneviève De Fer), and Jacques-François Bénard (Besnard) Danet (husband of Marie-Anne De Fer), and their heirs, who continued to publisher under the De Fer imprint until about 1760. It is of note that part of the De Fer legacy also passed to the engraver Remi Rircher, who married De Fer's third daughter, but Richer had little interest in the business and sold his share to the Danet brothers in 1621.