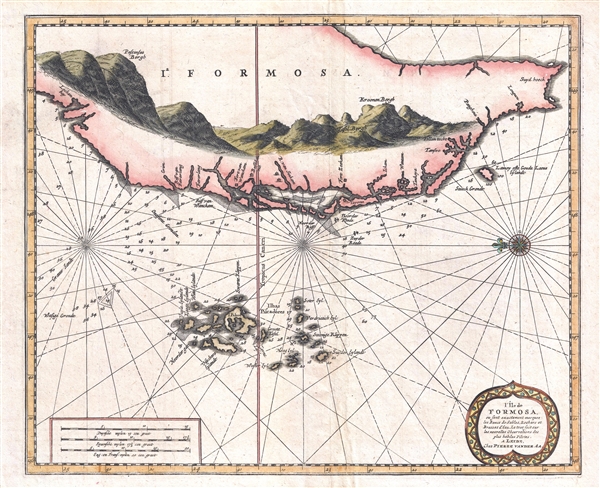 One of earliest obtainable maps to focus specifically on Taiwan or Formosa.

One of the few obtainable truly antique maps to focus specifically on Taiwan or Formosa, this is Pieter Van der Aa's 1729 nautical chart L'Île de Formosa. Oriented to the East, the map covers the southwestern three-fourths of the island as well the adjacent Penghu Islands, or Pescadores. Although this map dates to 1729, this map reflects Taiwan during the Dutch Colonial Period, when the island was under VOC rule, from 1624 to 1662. From 1622 the Dutch maintained a trading entrepôt on the Pescadore Islands. In 1624 they were driven from the islands by the Ming Chinese and fled to the mainland of Taiwan, where they established Fort Zeekam, or Fort Zeelandia, the Dutch base near the modern city of Tainan, here identified as Tayouan. The Dutch subsequently expanded to control much of Formosa and it became one of their most profitable East Asian factories. They developed extensive rice and sugar plantations, taking advantage of extensive imported Han labor from mainland China. In 1661 the Ming Chinese general Koxinga landed a large army at Lakjemuyse. He rallied the indigenous Taiwanese, as well as the Han workers imported from mainland China, against the Dutch, successfully driving them from the island after some 38 years of occupation. This map was printed in Leiden for Van Der Aa's 1729 Galerie Agreable du Monde.