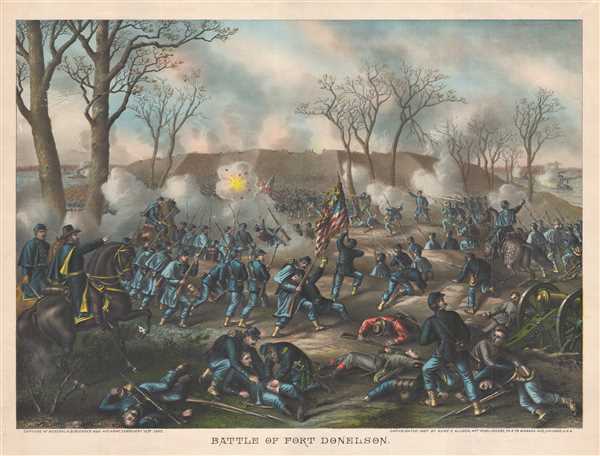 Illustrates the Union victory at Fort Donelson - one of Ulysses S. Grant's first victories in the American Civil War.

This is an 1887 Kurz and Allison view of the American Civil War Battle of Fort Donelson in Tennessee. The view illustrates the Union Army of the Tennessee commanded by Brigadier General Ulysses S. Grant (depicted on the left astride a horse) assaulting the Confederate stronghold at Fort Donelson.

The Battle of Fort Donelson

A major engagement in the Western Theater of the American Civil War, The Battle of Fort Donelson pitted an attacking Union force against a besieged Confederate force inside the fort. The battle was fought from February 12-16, 1862 and ended in a Union victory. Confederate forces, commanded by Brigadier General Gideon Johnson Pillow, unsuccessfully attempted to break out of the siege set by the Union Army of the Tennessee under the command of Brigadier General Ulysses S. Grant. After three days of savage fighting, Union General Ulysses S. Grant, responding to a note from Confederate Brigadier General Simon Bolivar Buckner, stated that the only terms of surrender he would offer would be 'unconditional surrender'. Buckner, who had been third in command, but was made commander after generals Floyd and Pillow fled, accepted Grant's terms, and ended the battle.

The Union victory opened a path to Nashville, which was evacuated by Confederate forces on February 23, becoming the first Confederate capital to fall into Union hands. Grant was promoted to major general, making him the second-highest-ranking officer in the Union Army. Over 12,000 Confederate soldiers were captured at the surrender, as they had been unable to escape the siege, and most of Tennessee now fell under Union control, although it was not immune to Confederate invasion or periodic raids.

This view was published by Kurz and Allison in 1887.