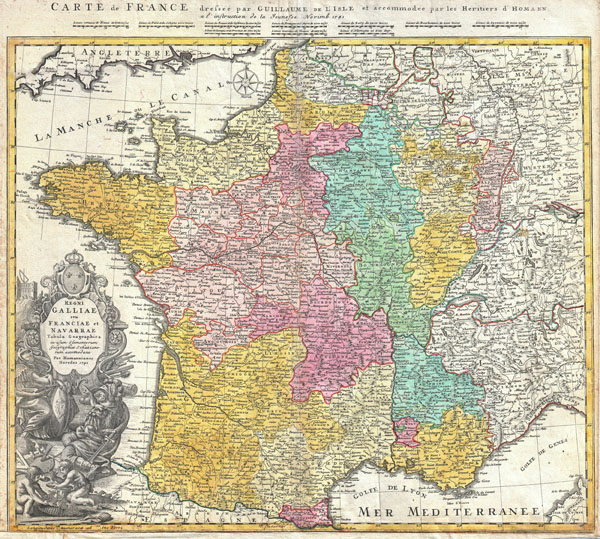 A beautifully detailed 1741 Homann Heirs map of France based upon earlier work of Guillaume de L'Isle. Depicts the Kingdoms of France and Navarre along with parts of Italy, Switzerland, Spain and Germany. The map notes fortified cities, villages, roads, bridges, forests, castles and topography. Elaborate title cartouche in the lower left quadrant features A bearded warrior with a sword hidden behind his back confronting a warrior woman with a gorgon shield. Above this couple is a large baroque title area surmounted by the French royal crest. Below the couple there are two children making wine. Map scales in upper margin. Alternative title in French in top margin, above scales Carte de France dressee par Guillaume de L'Isle et accommodee par les Heritiers d'Homann a l'instruction de la Jeunesse Norimb. 1741. This map was drawn in Nuremberg by J. B. Homann and included in the Homann Heirs Maior Atlas Scholasticus ex Triginta Sex Generalibus et Specialibus…. .

Very good condition. Margin added to bottom to accomidate framing. Original centerfold has a couple of extra creases. Blank on verso. Original color.
Looking for a high-resolution scan of this?