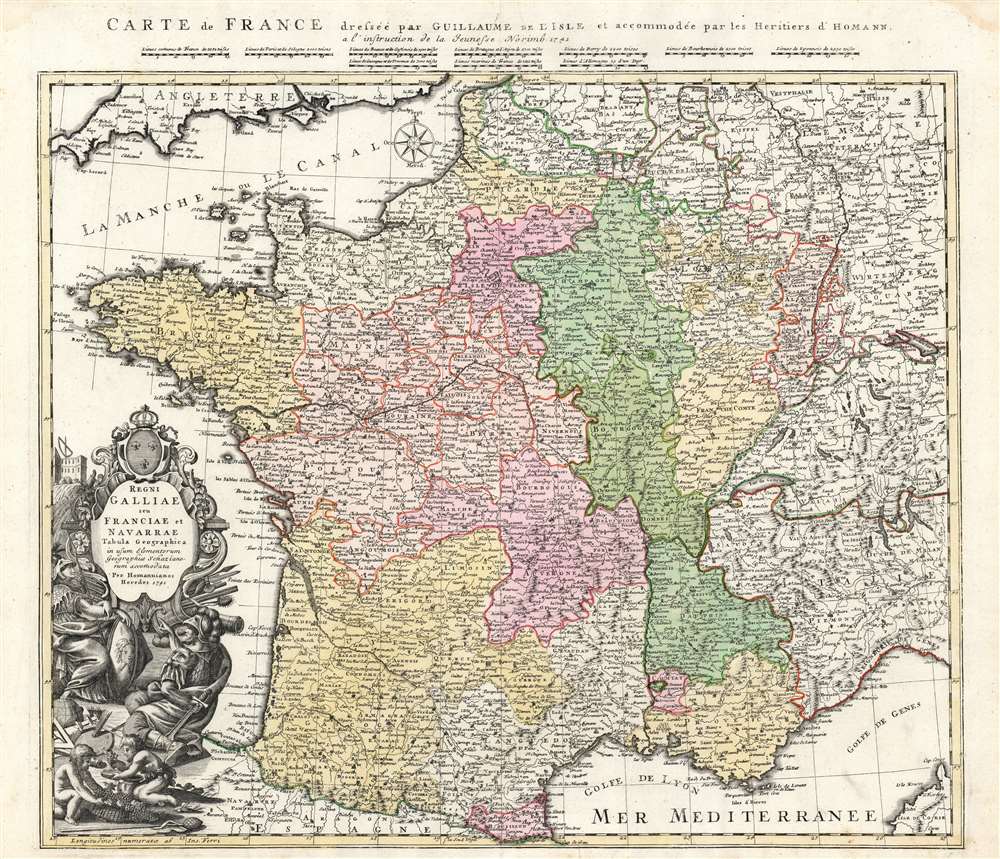 The map's allegorical title cartouche features Ares (armed with a sword and fiercely bearded) in discourse with Athena (also armed, with spear and medusa shield). While both were classical gods of war, Ares was the patron of war's violence, horror, and passion, while Athena's metier was 'wisdom in war', cleverness, and strategy. In the eyes of the classical scholars of the seventeenth and eighteenth centuries, Athena's sphere would expand to embrace the arts, science, and technology. On the ground between them are paintbrushes, a palette, globe, and geographers' tools. Behind the pair of gods is a large baroque plinth surmounted by the French royal crest. Sprouting from Ares' side of the plinth are the tools of war: spears, cannon, and cannonballs. In the background on Athena's side is an observatory. Ares is holding his sword behind his back: either he thinks he can pull a fast one on Athena (a bad plan if the stories are anything to go by) or he's simply not brandishing it at her (a better plan, though to be fair Ares always came off as pretty dumb so this is a long shot). In the foreground below two children (wingless putti?) are making wine, possibly to soothe ill-temper and prevent any imminent conflict.

In the upper margin is an additional title in French, as well as the map's scales for no fewer than ten separate reckonings of leagues, nine of which were in use in different parts of France.

Homann Heirs but Not Homann

The source for this map chosen by Schatz, interestingly, is not the elder Homann's work. Although Johann Baptiste Homann had produced his own map of France, Schatz instead selected Guillaume De l'Isle's Carte De France as a model. This is perhaps a testament to the authority invested in De l'Isle, whose position as Geographer to the King of France preserved his place at the forefront of geography long after his death.

This map was engraved in Nuremberg by the firm of the Heirs of Homann, for inclusion in Johann Jacob Schatz's Erste Anfangs-Gründe Der Geographie... A later state of the map, as late as 1778, bears the Imperial Privilege, lacking here. This 1741 state is listed in sixteen separate examples in OCLC.


Johann Jacob Schatz (1691 - 1760) was a German schoolmaster, librarian, classical philologistphilologist and historian who lived and worked in Strasbourg. He was prolific, with geographical and historical works published in Nuremberg and Leipzig beginning in 1726 and continuing lifelong. He seems to have had a long relationship with the firm of Homann Heirs. Despite his considerable output, there is nothing recorded of his life, education, or history. Learn More...