1844 Black Map of France in Provinces 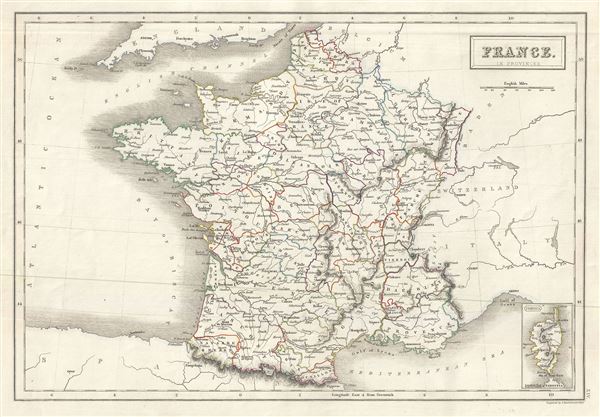 1844 Black Map of France in Provinces

This is a lovely example of Adam and Charles Black's 1844 map of France. The map covers the Kingdom of France showing its various divisions according to province. It covers from the Flanders in the north to Roussillon in the south and from Brittany in the west to Alsace in the east. An inset map on the lower right corner details Corsica. Throughout, the map identifies various cities, towns, rivers, lakes, roadways, railways and an assortment of additional topographical details.

This time in French history marked the rule of the July Monarchy, a liberal constitutional monarchy under King Louis-Philippe. The July Monarchy would last until the Revolution of 1848 and ultimately lead to the establishment of the Second Republic. In less than a year after the December 2, 1851 coup d'etat, the Second Republic transformed into the Second Empire, established by a referendum on November 7, 1852. President Louis-Napoleon Bonaparte, elected by the heavily Bonapartist French people, officially became Napoleon III, Emperor of the French, from the symbolic and historic date of December 2, 1852. This map was engraved by J. Bartholomew for issue as plate no. XIV in the 1844 edition of Black's General Atlas.