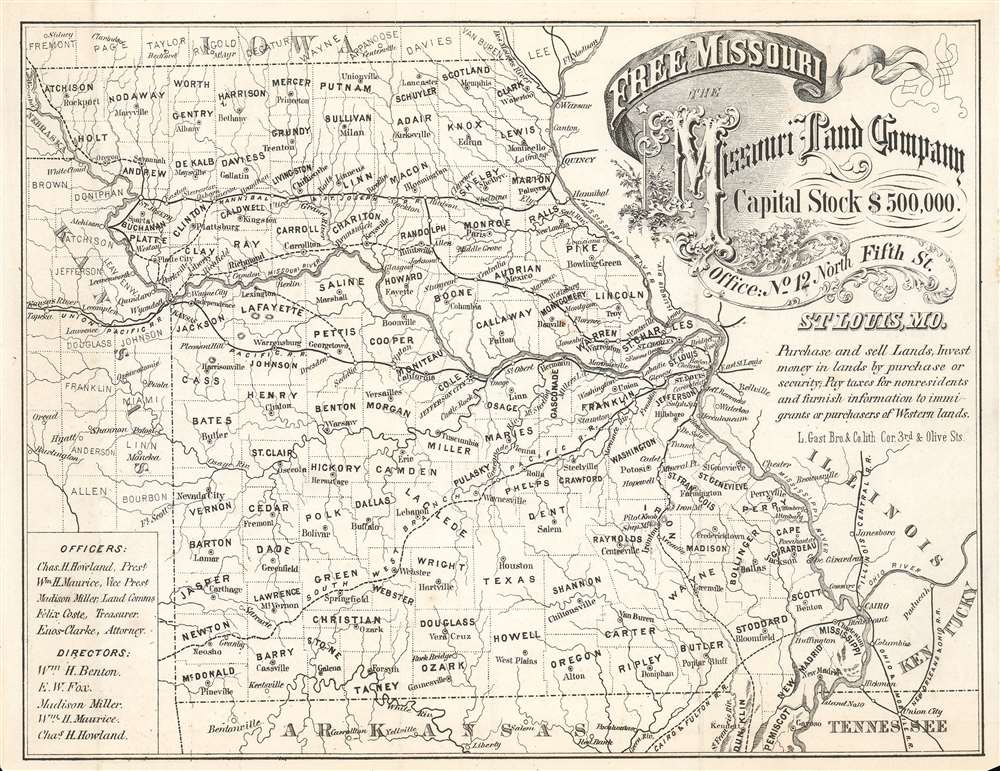 This is an 1865 Leopold Gast and Brother Lithograph Co. promotional map of Missouri issued for the Missouri Land Company. Several railroads are labeled, including the Union Pacific Railroad and the Hannibal and St. Joseph Railroad. The majority of the Southwest Branch of the Pacific Railroad is illustrated by a dashed line, indicating that it had not yet been built when this piece was published. Most of the Cairo and Fulton Railroad is illustrated in the same manner. The officers of the Missouri Land Company are listed in the lower left corner, along with the Board of Directors.

The Missouri Land Company was founded by Charles H. Howland, a State Senator, and his associates in 1865 and the company received an act of the General Assembly of Missouri to be incorporated on February 18, 1865. A contemporary newspaper advertisement lauds 'Free Missouri', likely in an effort to assuage northern fears about moving to the newly freed slave state. Other than this bit of information, little else is known about the Missouri Land Company, leading us to speculate that, even though well funded the company did not have longevity.

A Short History of Slavery in Missouri

Missouri entered the United States as a slave state in 1820 following the successful passage of what has become known as the Missouri Compromise. This agreement allowed for Missouri to enter the Union as a slave state while Maine would be admitted as a free state, along with several other provisions governing slavery in the unorganized territories.

Thus, from 1820 until 1865, slavery was legal in Missouri. The 'peculiar institution' was different in Missouri than other states, however, since Missouri's climate was not suitable for plantations. This meant that slaveholding Missourians, many of whom came from other border states, usually held no more than ten slaves and farmed crops of tobacco, hemp, and corn and raised livestock. The small number of slaves also effected the institution's profitability, leading to many slave owners working in the fields beside their slaves, or hiring them out to neighbors. This phenomenon created different relationships between slave owners and enslaved but did not mean that slavery in Missouri was any less brutal than it was in the Deep South.

Challenges to Slavery in Missouri and Its Demise

The first real challenge to slavery in Missouri came from the influx of immigrants from the north who were not slaveowners as well as foreign immigrants, who also did not own slaves. This reduced the slaveholding population in Missouri from eighteen percent in 1830 to ten percent in 1860. The second challenge was Congress's decision to allow Kansas to vote on slavery, which slave owners in Missouri saw as an attack on their rights. This decision led to cross-border conflicts and illegal voting in Kansas by Missourians. The final blow, of course, came during the Civil War. A majority of Missouri's citizens voted to remain in the Union, but soon Union troops were flooding into the state. This precipitated a brutal guerrilla war in the countryside, where many Missourians believed the Union presence to be an illegal occupation. After nearly four years of warfare, the Missouri State Constitutional Convention passed a resolution officially emancipating Missouri's slaves, finally ending the question of slavery in Missouri. This act was accompanied by telegrams delivered to the governors of all free states, all of whom replied with a hearty welcome and congratulations.

Free Missouri and This Map

Although the historical record is unclear, this broadside and the Missouri Land Company are likely trying to capitalize on the euphoria surrounding the 'self-liberation' of Missouri. After years of brutal war, they are likely trying to encourage new settlers to move to their state, both for their economic benefit and to try and help jump-start Missouri's recovery. All of this, of course, is speculation.

This map was created and published by the Leopold Gast Brother and Company lithographers on behalf of the Missouri Land Company in 1865. We are aware of only one other example.

Leopold Gast (March 11, 1810 - March 1, 1898) was a German-American lithographer. Born Lippe Detmold, Germany, Gast was educated in Berlin. Gast participated in the German Revolution of 1848, and soon emigrated to the United States with his family and his brother August (March 10, 1819 - December 24, 1891) arriving in New Orleans. Since they were trained as lithographers, the brothers brought their lithography press with them. The duo worked in New York City for a few months, and then spent over a year in Pittsburgh before settling in St. Louis, Missouri in 1852. In St. Louis the brothers founded Leopold Gast and Brother Lighograph Company, which Leopold ran until he sold his share of the business to August in 1866. After the sale of his firm, the historical record is unclear about what Leopold undertook professionally. In both the 1870 and 1880 Census, Gast listed his profession as lithographer and his residence as being in St. Louis. Before leaving Germany, Gast married his wife Bertha, with whom he had six children, four before leaving Germany and another two after arriving in the United States. Learn More...


August Herman Ludwig Gast (March 10, 1819 - December 24, 1891) was a German-American lithographer. Born in Lippe Detmold, Germany, was educated there, and went into the lithography business with his brother Leopold (March 11, 1810 - March 1, 1898). After participating in the Revolution of 1848, the brothers emigrated to the United States and arrived in New Orleans and, of course, they brought their lithography press with them. them. The duo worked in New York City for a few months, and then spent over a year in Pittsburgh before settling in St. Louis, Missouri in 1852. In St. Louis the brothers founded Leopold Gast and Brother Lighograph Company, which Leopold ran until he sold his share of the business to August in 1866. After Leopold's departure, Gast continued to grow his lithography business, now called August Gast and Company, until he sold it in 1885, when it was one of the largest firms of its kind in the country. After the sale, Gast founded the August Gast Bank Note and Lithograph Company and the Gast Wine Company. Gast died of 'la grippe' in St. Louis at the age of 72. He married his wife Sophie von Laer in 1853. Tragically, Sophie died in 1864. At some point thereafter, Gast married Marie Barthel, with whom he had thirteen children, of whom only four were alive at the time of August Gast's death. Following Gast's death, his son Ferdinand takes over the businesses, and the Gast Wine Company is absorbed by the Gast Brewing Company in 1900. The Gasts continue to prosper and found the Gast Building and Realty Company in 1944, and Ferdinand's grandsons, Ferd Gast and Robert Gast, invest in and develop real estate. Robert created several companies over his lifetime, including those that invest in single family homes and ones to develop, build, and operate amusement parks. Doug Gast, Robert's son, stars a financial investmentsd business in the 1960s, followed by Gast Webbing Restraints in the 1980s, which manufactured automotive parts. By the 2000s, the third generation of Gasts are involved in the family real estate business, and today Gast Companies has consolidated in order to manage their diverse portfolio. Learn More...