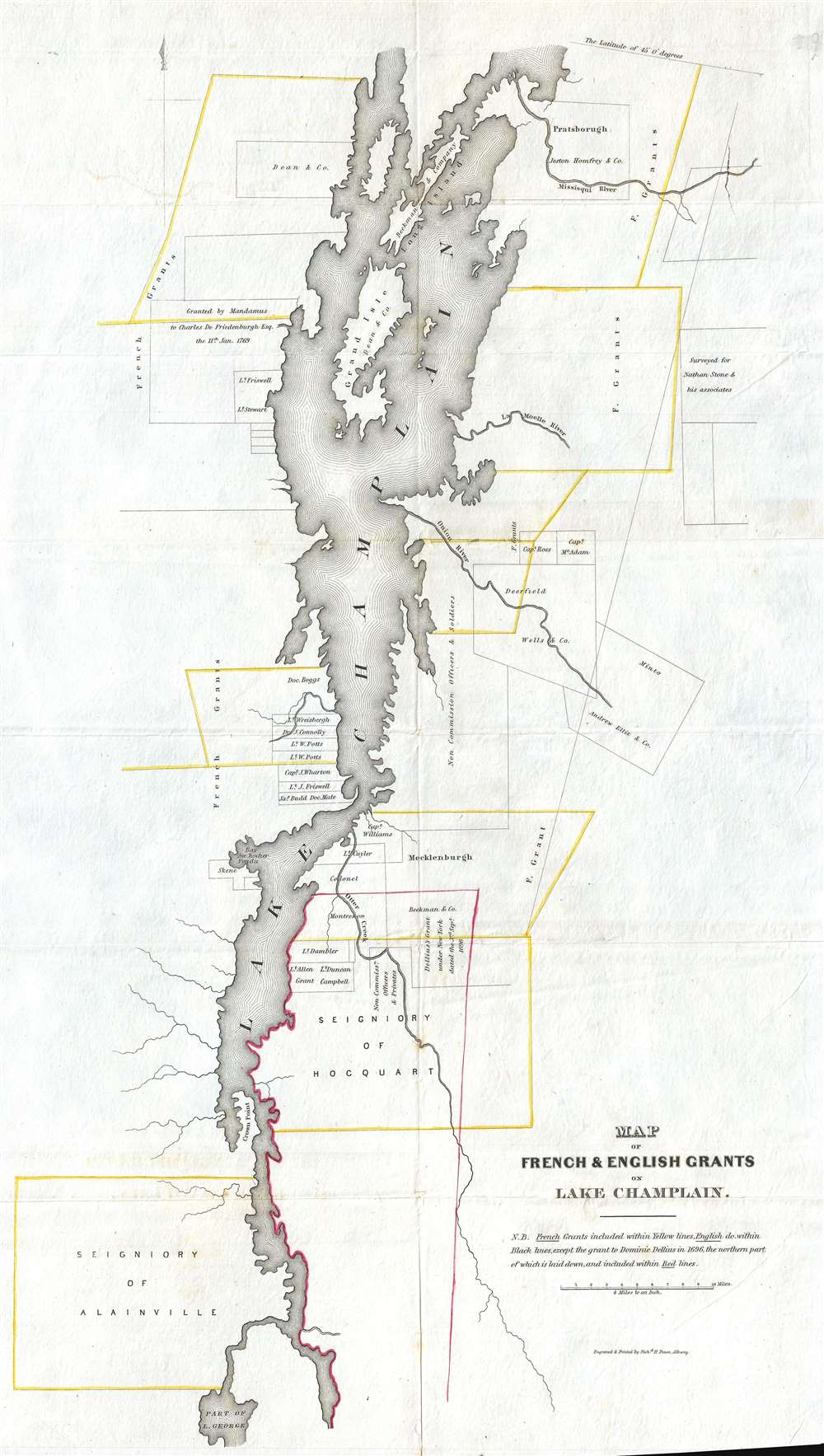 This is an 1851 Richard H. Pease map of Lake Champlain. The map depicts Lake Champlain from the extreme northern end of Lake George to 45° 0' latitude and a certain amount of land on either side of the lake. French and English land grants surrounding the lake are depicted, with French grants illustrated in yellow and English grants in black, with the except of the grant to Dominic Dellius in 1696, the northern part of which is presented using red lines. While the chronology of the grants is unclear, it is apparent that, except for that of Dominic Dellius, the French grants were much larger than those given to the English. The possibility exists that, given the work in which this map was included, that better records were available regarding English grants, which allows for their much more precise presentation. Apart from the depiction of the grants, very little detail is included. Depth in Lake Champlain is shown by hachure, and a few rivers are illustrated running into the lake. Both Grand Isle and Long Island are presented in Lake Champlain.

This map was engraved and printed by Richard H. Pease of Albany, and included in Edmund Bailey O'Callaghan's The Documentary History of the State of New York in 1851.

Richard H. Pease (1813 - 1869) was an American merchant and lithographer active in Albany, New York, during the middle part of the 19th century. Pease is best recognized for his publication of America's first Christmas card for the 1849 -1850 holiday season. He also played a role in populating the American version of Santa Claus and tying it to consumerism in the holiday advertisements his produced for his 'Temple of Fancy or Pease's Great Variety Store.' Pease operated the Great Variety Store in tandem with his lithography business until he passed the store on to his son, Harry E. Pease, in 1855. The store was located at 516 Broadway, Albany. Pease also published hand-colored lithographs of fruit for Ebenezer Emmons’s book Agriculture of New York State, published between 1846 and 1854. From 1856 to 1867 he worked with the lithography firm of Hoffman, Knickerbocker and Co. Learn More...