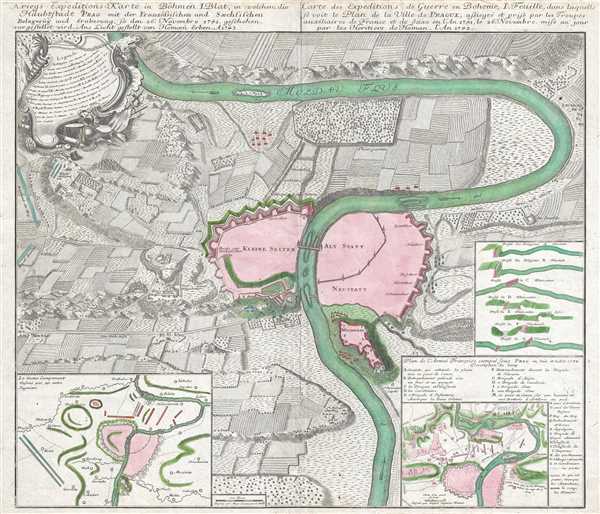 An innovative battle for Prague fought during the War of the Austrian Succession.
$675.00

This is a 1743 Homann Heirs map of Prague or Praha. Created as the first in a series of maps illustrating events during the War of the Austrian Succession, the map depicts the walled city of Prague at its center along with the surrounding territory. Beautifully engraved and highly detailed, twenty-one different locations relating to the 1741 Battle of Prague are alphanumerically identified. These labeled locations correspond to an index situated in the upper left corner in a decorative cartouche. Other locations are labeled, such as the King's Regiment (Regiment du Roy) and the Bavarian Regiment (Royal Baviere), and the Royal Artillery (Royal Artillerie) near the left border. Other positions taken up by French and Bavarian troops are illustrated all around the city, with the Bavarian positions shaded in blue and the French positions shaded in red. Several abbeys and chapels are illustrated, along with a zoo (Thiergarten), other gardens, and a hospital. A diagram along the right border depicts the profile of the city walls in seven different locations around Prague. An inset map in the lower right corner illustrates the same region one year later, when the French were besieged in Prague by the Austrians and alphabetically labels twenty-six different locations throughout the map. A second inset map, in the lower left corner, provides a wider view of the region, illustrating French and Bavarian positions during the siege.

The War of the Austrian Succession was fought over the question of Maria Theresa's succession to the Habsburg Monarchy. During the war, the Prussians invaded Silesia with the goal of annexing that territory. France, fearful that the Prussians would gain incredible amounts of territory, entered the war on the Prussian side in support of the claim of Elector Charles Albert of Bavaria to the Austrian thrown. Supported by Bavarian and Saxon soldiers, the French army initially marched on Vienna before abruptly changing course and invading Bohemia. This column, which the Austrians could not find, advanced on Prague, the capital of Bohemia. Led by the intelligent and experienced Maurice de Saxe, he and a small party reconnoitered Prague and were able to recognize where they had an advantage. Saxe sent his most competent (and boldest) officer, Colonel François de Chevert, to assault the walls at night. During the night of 25-26 November, Chevert and his men employed ladders to scale a parapet and capture a section of the walls. They then opened the Prague's gate for Saxe's cavalry, leaving the city's defenders no choice but surrender.

This map was drawn by Lieutenant Meyer of the Artillery, and the inset map in the lower right was drawn by a French engineer named Sinsart. The whole was compiled and published by Homann Heirs in 1743.