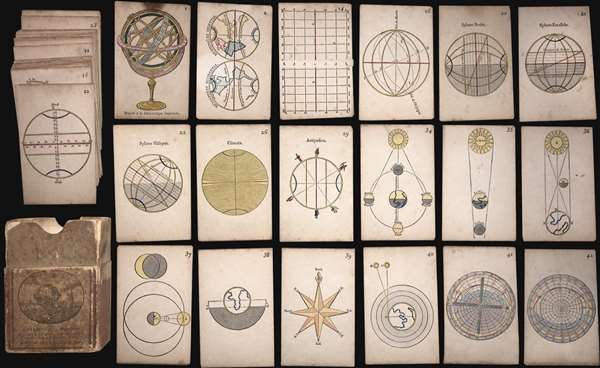 This is an extremely rare complete set of French c. 1807 hand-colored woodcut playing cards prepared as an introductory course on geography and astronomy. The set of 42 cards features a compass rose, an armillary sphere, maps, and more. On the verso of each cards is an explanatory note.

The cards are the known work of Louis-Michel Pâris, a French cleric and teacher active in Normandy. He published the cards as a teaching aid for his secondary school in Argentan. Although the card set is not dated, it was probably printed in 1805 or 1806. We know that Pâris was working on a second edition of the cards, which was never published, when he died in 1806.

The cards were engraved in Alençon, Normandy, by Pierre-François Godard, and published by Breé Freres of Falaise, France. The design and text are the work of Louis-Michel Pâris.

Louis-Michel Pâris (September 29, 1740 - June 16, 1806) was a French cleric, teacher, printer, and scientist. He was born in the town of Argentan, Normandy in 1740. Pâris entered the priesthood and upon taking orders, began teaching in his hometown of Argentan. During the French Revolution, Pâris was one of the priests who refused to take the Obligatory Oath, a statement of primary allegiance to France required by the July 12, 1790 law Constitution Civile du Clergé. Facing censure and possible arrest by the Revolutionary government, Pâris fled France on September 17 of 1792 and, along with many other refugees fleeing the revolution, established himself in London. There he befriended L'Abbé Carron of Rennes, and together they established a school for French Refugees in London, where hew taught for two years. Pâris remained in England for nine years, finally returning to Argentan in December of 1801, when the Concordat of 1801, an agreement between France and Pope Pius VII that reaffirmed the Roman Catholic Church as the majority church of France and restored some of its civil status, eliminated the Obligatory Oath requirement. Back in France, Pâris resumed his work teaching local children, ultimately founding a secondary school in 1803. He published several works, including one on geography and another on French grammar intended to aid his students. He also issued a set of geographical and astronomical cards. Pâris died suddenly in 1806. Learn More...


Pierre-François Godard (January 21, 1768 - July 22, 1838) was a French woodcut engraver active in Normandy during the late 18th and early 19th centuries. Pierre-François was born in Alençon, Normandy, where his father, Jean Godard (1735 - 1802), was also an engraver, printer, and bookbinder, although self-taught. As a young man he travelled to Nantes where he perfected engraving before returning to Alençon to establish himself as a bookseller and engraver. His earliest engravings date to 1787. He engraved various woodcuts for historical and fictional publications as well as card games for Bree Freres and Étienne de Jouy (1764-1846). Around 1814, citing deteriorating eyesight, Godard stopped engraving, and instead focused on his bookstore. Retiring, Godard sold his bookstore to Auguste-Jean Ruel in 1834. He died 4 years later. His son, Pierre-François Godard, generally known as Godard II d'Alençon (November 8, 1797 - December 15, 1864) was also a wood engraver and followed in the family tradition of bookselling and printing. Learn More...