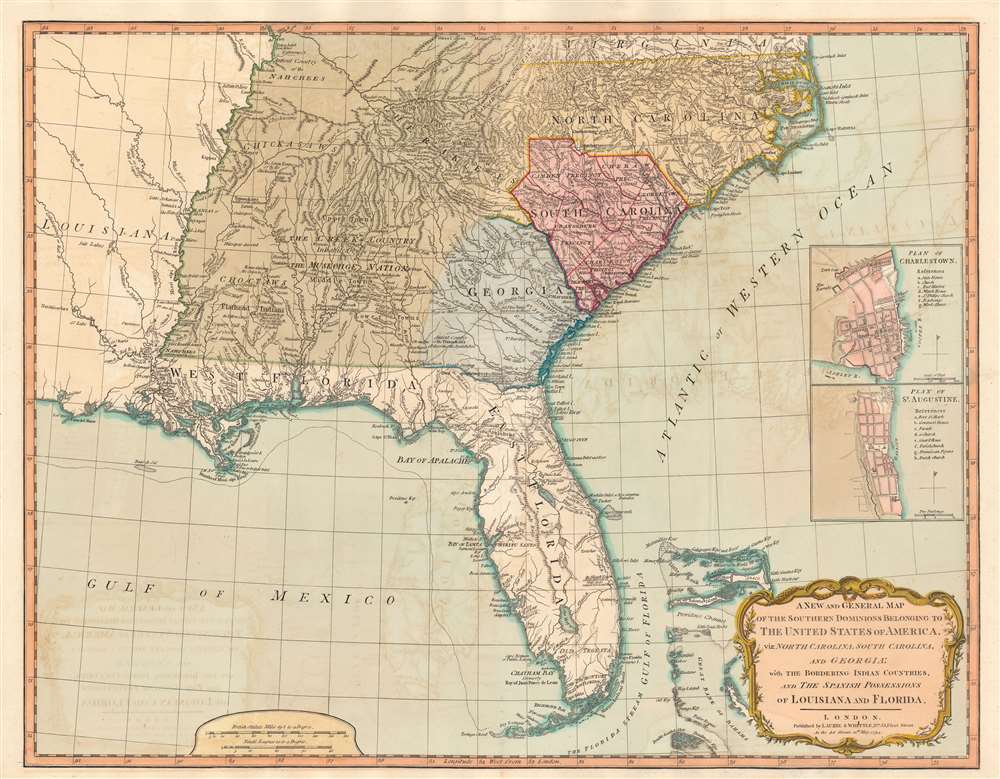 Best general map of the Southeast of the 18th Century.

This map compiles the finest maps available of the region at the beginning of the American Revolutionary War (1775 - 1783), being derived from the works of Bernard Romans but also William Gerard De Brahm, John Abraham Collet, and Henry Mouzon. Its particularly excellent Florida content is derived from Bernard Romans for inclusion in his A Concise Natural History of East and West Florida,. It is a towering irony that the work of Romans - an active campaigner for the American cause - should have received its broadest publication in the Sayer and Bennett American Military Pocket Atlas, the so-called 'Holster Atlas,' printed in London for the use of British officers during the Revolutionary War.

The coverage extends from North Carolina to the Florida Keys and from just beyond the Mississippi River to the Atlantic seaboard and the Bahamas. It encompasses the modern-day states of North Carolina, South Carolina, Georgia, Kentucky, Tennessee, Alabama, Mississippi, Louisiana (very little detail), and Florida. At right, there are inset detail maps of Charleston, South Carolina and St. Augustine, Florida.

A Field Aid During the Revolutionary War

This map was initially designed by Robert Sayer to be an essential field aid to British officers during the American Revolutionary War (1775 - 1783). As such, it offers a wealth of fascinating detail, particular as regards the American Indian nations in the western quadrants. It identifies lands and territories associated with Amerindian nations, including the Creek, Muskogee, Cherokee, Choctaw, Chickasaw, Natchez, multiple subgroups, and smaller tribes. It further notes trade routes to the various tribal nations, including the famed Upper Path, the Middle Path, and the Lower Path - major trade arteries to the Creek nations.

This map was first issued Robert Sayer and John Bennett in 1776 for British field officers during the American Revolutionary War (1775 - 1783). It was part of a six-map dissected pocket atlas known, commonly, as the Holster Atlas. The Sayer and Bennett firm passed to Laurie and Whittle, who would continue to publish the map in their atlases. The present example is the second edition, engraved for Laurie and Whittle in 1794 for their edition of Thomas Kitchin's General Atlas. While cartographically similar, the present edition is notable for its revision to include the 'United States of America' in the title. We see twenty examples of the separate map catalogued in OCLC.


Robert Sayer (1725 - January 29, 1794) was an important English map publisher and engraver active from the mid to late 18th century. Sayer was born in Sunderland, England, in 1725. He may have clerked as a young man with the Bank of England, but this is unclear. His brother, James Sayer, married Mary Overton, daughter-in-law of John Overton and widow of Philip Overton. Sayer initially worked under Mary Overton, but by December of 1748 was managing the Overton enterprise and gradually took it over, transitioning the plates to his own name. When Thomas Jefferys went bankrupt in 1766, Sayer offered financial assistance to help him stay in business and, in this way, acquired rights to many of the important Jefferys map plates as well as his unpublished research. From about 1774, he began publishing with his apprentice, John Bennett (fl. 1770 - 1784), as Sayer and Bennett, but the partnership was not formalized until 1777. Bennett retired in 1784 following a mental collapse and the imprint reverted to Robert Sayer. From 1790, Sayer added Robert Laurie and James Whittle to his enterprise, renaming the firm Robert Sayer and Company. Ultimately, Laurie and Whittle partnered to take over his firm. Sayer retired to Bath, where, after a long illness, he died. During most of his career, Sayer was based at 53 Fleet Street, London. His work is particularly significant for its publication of many British maps relating to the American Revolutionary War. Unlike many map makers of his generation, Sayer was a good businessman and left a personal fortune and great estate to his son, James Sayer, who never worked in the publishing business. Learn More...


Bernard Romans (c. 1720 – 1784)was a Dutch-born polymath who worked in the British American colonies and the United States. He is best known for his 1775 A Concise Natural History of East and West Florida, and had several seminal maps of the British Colonies to his credit, considered the best produced to date of their respective areas. He was born in Delft as Barend Romans; he was educated there, but emigrated to England at an early age, and relocated to America in and around 1757 during the course of the Seven Years' War. He married in Albany, New York, having a son in 1762. He entered service with the British during the war, at times as a privateer. His travels during and after the war took him as far as Labrador, Curaçao, Cartagena, and Panama. They were not always remunerative: at one point he lost nearly all his wealth in a shipwreck; in order to make ends meet he gained employment as a surveyor - both privately, and for the Georgia colony. It was during this period, between 1770 and 1772, that he surveyed the Florida coastline as well as well as the interior of West Florida. 1773 found Romans traveling north to sell his nautical charts and his work on the natural history of Florida. Yet another shipwreck - his ship having been capsized - ruined seeds and plant specimens that he had collected. He was able to save his charts, however, and undertook to find backers for a book on the natural history of Florida, which would contain his maps of the Floridas and the Caribbean. His efforts gained him entry to the Marine Society of the City of New York in 1773, and the next year to the American Philosophical Society. He succeeded in publishing the first volume of his Concise Natural History in 1775, and it was successful enough to warrant a further edition the following year. With the advent of the American Revolution, his sympathies were with the Americans: he would be in 1775 mad a captain of the Connecticut Committee of Safety, and raised a body of 200 men to assist in the taking of Fort Ticonderoga and Fort George. While it is not known if he was actually there, Romans published a depiction of the battle of Bunker Hill and a map of the area around Boston. Ironically, British officers benefitted from Romans' cartographic efforts: his map of the Southeast and Florida was included in the so-called Holster Atlas, intended for the use of British officers. Also, Romans' book suffered from the war: his publisher, deemed overly neutral in the conflict, suffered the sacking of his printing house by a patriotic mob. Nevertheless, in between efforts to design defenses for American forces and spying out British naval efforts in Lake Champlain, he produced more maps: two of Connecticut, one of Penssylvania, Maryland, New Jersey and Delaware, and a map of the Northeast.

Romans would resign his commission in 1778, thereafter working on a history of Dutch oppression at the hands of the British. In 1780 he would go back to war, intending to serve with the American army in South Carolina. His nautical misfortunes continued tragically: his ship from New London to Charleston was captured by the British Navy. He was held prisoner until the end of the war, and died on shipboard while returning home - thought by some, including his widow, to have been murdered en route.

It is tantalizing to think what Romans might have achieved with more time: Back in 1774 he had been promoting the notion of a bold expedition: an exploration the Mississippi River basin and the Great Lakes, turning thence to the Pacific coast. The goal then would be to cross the Pacific to northeastern, Asia, and then travel through Russia, eventually reaching Great Britain. It should be noted that this proposed journey predated Lewis and Clark by thirty years. Learn More...