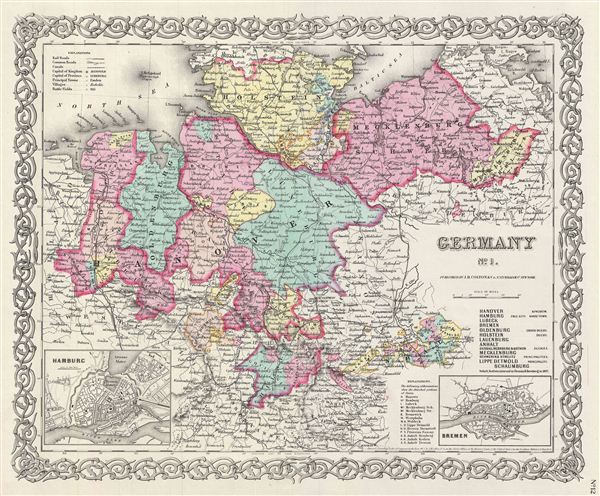 A beautiful 1855 first edition example of Colton's map of northern Germany. Like most of Colton's europe maps, this map was derived from an earlier wall map of the World produced by Colton and D. Griffing Johnson. Covers the 19th century German provinces of Hanover, Holstein, and Mecklenberg Schwerin. An inset city plan in the lower left quadrant details Hamburg, while another in the lower right quadrant focuses on Bremen.

Prussia attained its greatest importance in the 18th and 19th centuries when it dominated northern Germany politically, economically, and in population. The German Confederation, created in 1814, acted as a buffer zone between Austria and Prussia, its two largest and most powerful member states. Nonetheless the rivalry between the two powerful states increased until the breakout of the Austro-Prussian War. Prussia won the Austro-Prussian War in 1866, ultimately leading to the collapse of the German Confederation and the creation of the North German Confederation. A few years later, in 1871, most of the former Confederation states were folded into the newly proclaimed German empire.