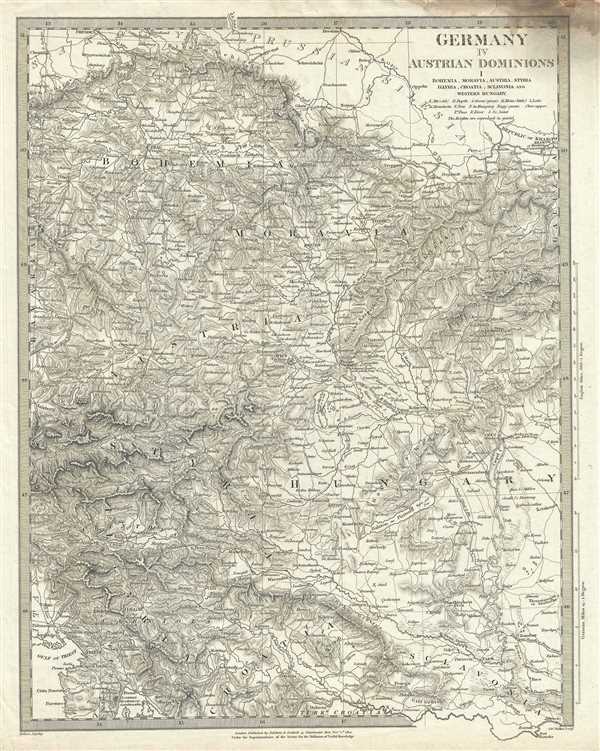 This is a beautiful 1832 first edition S.D.U.K. map of Central Europe and the German States including Eastern Austria, Western Hungary, Czech Republic and parts of the Balkan states. Throughout, the map identifies various cities, towns, rivers and assortment of additional topographical details.

After the defeat of Napoleon, the Congress of Vienna created The German Confederation to coordinate the economies of these separate but culturally related German-speaking countries. The Confederation acted as a buffer zone between Austria and Prussia, the two largest and most powerful member states. Nonetheless the rivalry between the two powerful states increased until the break out of the Austro-Prussian War. Prussia won the Austro-Prussian War in 1866, which ultimately led to the collapse of the German Confederation. A few years later, in 1871, most of the former Confederation states were folded into the newly proclaimed German Empire.

This map is part of A Series of Maps, Modern and Ancient, issued by subscription. Each folder in the series would contain a set of two maps bound together. The map accompanying this folder, not included here, was of Lake Superior. Original folder includes the names of committee members of the ‘Society’, list of maps previously published, the folder number, which is this case is XXVIII, its contents and the printer and publication details. This map was engraved by J. and C. Walker and issued by the Society for the Diffusion of Useful Knowledge’s subscriber’s edition folder. The folder at the time was priced at 1 shilling plain or 1 shilling 6 pence colored. Published by Baldwin and Cradock.