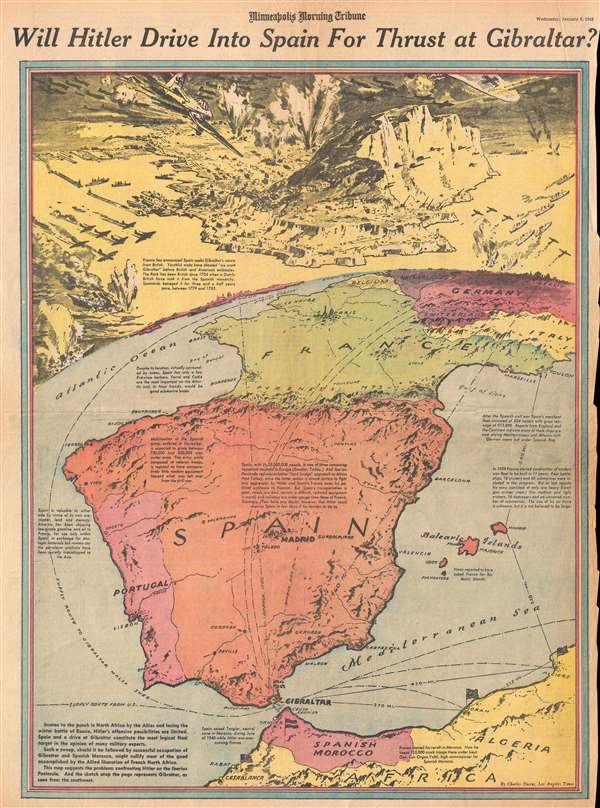 Includes an incredible view of an imagined Nazi aerial attack on Gibraltar.
$250.00

This is a Wednesday, January 6, 1943 Charles Hamilton Owens and Minneapolis Morning Tribune pictorial map of western Europe illustrating a possible Nazi German attack on Gibraltar. The most striking feature on the map is a view of Gibraltar, from the southwest, during the imagined Nazi air raid, complete with fighter aircraft adorned Nazi insignia. The map depicts the region from the Atlantic Ocean to Berlin and from London to Morocco and Algeria. Created nearly two months after Operation Torch, the Allied invasion of French North Africa, the artist is presenting the possibility that Germany, which was now on the defensive in Russia and in North Africa, could decide to go on the offensive. Per 'many military experts', the 'most logical target' for this attack would be Spain and Gibraltar. Located on the Mediterranean coast just across the Strait of Gibraltar from Tangier, Gibraltar had been a British stronghold since 1704. It was also the location where General Dwight Eisenhower commanded Operation Torch.

Highlighting the current state of the war in the region, American flags are illustrated waving over Casablanca, Morocco, and Oran and Algiers, Algeria, since they had been captured/liberated by American forces in November. Gibraltar, is, of course, marked by a Union Jack. Numerous cities throughout the region are labeled, including Madrid, Paris, London, and Berlin, each of which include pictorial illustrations of famous buildings in that city. Vichy, France is also labeled. The most striking feature, as stated above, is the view of Gibraltar situated along the top border. Exquisitely detailed, numerous Nazi German aircraft are illustrated attacking the city and the Rock. Explosions and sinking ships, along with a few burning aircraft, perfect the image of the imagined carnage caused by such an attack.

Stylistically this cover owes a debt to the work of Richard Edes Harrison, an American illustrator and cartographer who, working for Fortune magazine, pioneered a new style of representing the world for WWII era propaganda maps. Edes developed the convention of using spherical perspective with an exaggerated vertical dimension, as on the present map, to illustrate part of the world as part of a greater global situation. This map was created by Charles Hamilton Owens for the Los Angeles Times and printed in the Minneapolis Morning Tribune on Wednesday, January 6, 1943.

Good. Newsprint. Even overall toning. Closed tears along left and right margins professionally repaired on verso. Text on verso.
Looking for a high-resolution scan of this?