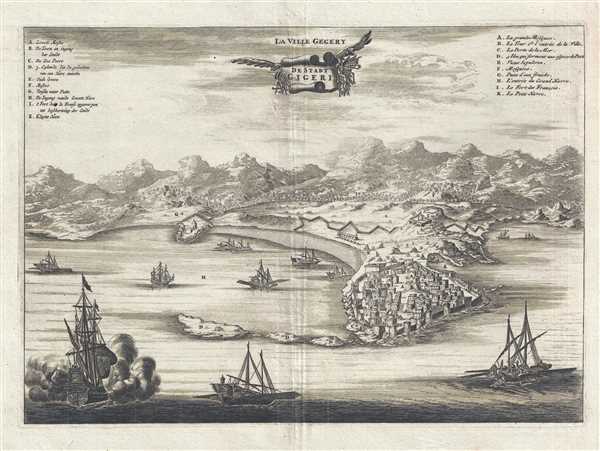 A prominent North African trading port for French merchants during the 17th century.
$200.00

This is a 1686 Olfert Dapper view of Gigeri (Gegery), Algeria. The view depicts the city from the Mediterranean Sea, as the city was known to sit along the coastline without stretching very far inland. The city walls and individual buildings are illustrated, along with the fortress built on a hill outside the city. Several other buildings dot the landscape outside the city, most of which are mosques. Numerous ships of varying size are included in the harbor and in the Mediterranean Sea approaching the city. One of the ship in the foreground appears to be firing its cannons, although it is unclear as to the barrage's intended target. Ten locations throughout the map are alphabetically identified (although several letters appear more than once). Corresponding keys in both Dutch and French are situated in the upper left and upper right corners, respectively.

Per Description d'Afrique, Gigeri was a village situated an equal distance from Algiers and Béjaïa along the Mediterranean coast and consisted of 1500 dwellings. Until overtaken by the Muslim invasions of North Africa in 1664, Gigeri had been a trading hub for French merchants, particularly those seeking wax and animal skins. The French fought the invaders and lost several hundred men, and eventually abandoned Gigeri and returned to France.