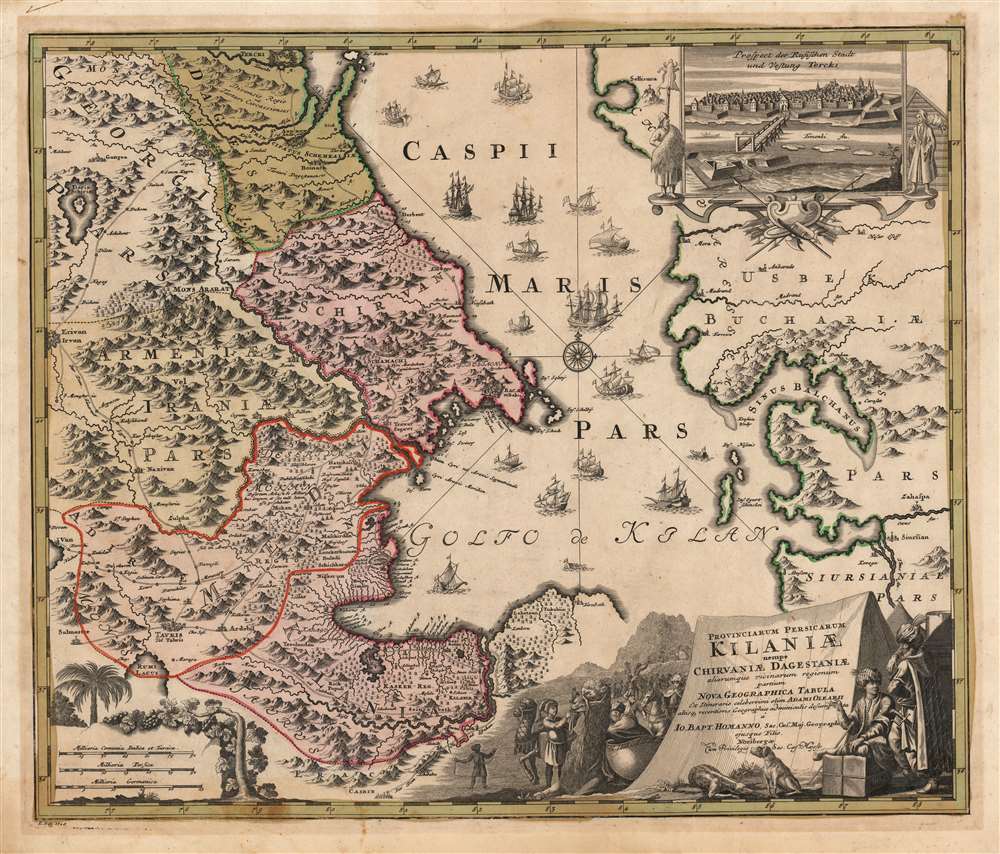 This map, printed by Johann Baptist Homann and published by his son Johann Christoph Homann, focuses on the Caucuses, now occupied by modern-day Dagestan, Azerbaijan, Armenia, and Iran, on the western coast of the Caspian Sea. The inset view at the upper right depicts Terek, which appears on the map at its northern extent. This was the main outpost of the Terek Cossacks, Russia's vassals on the Empire's Caucasus frontier.

The map's western detail is largely derived from the reports and maps of Adam Olearius, who between 1633 and 1639 journeyed with an embassy to Muscovy and Persia. Olearius' party traveled down the Volga by boat and continued that way along the western shore of the Caspian Sea to the province of Gilan and the city of Rasht, in Persia. Olearius' work provided the best 17h century European mapping of the Volga River and the Caspian Sea, which would not be supplanted until well into the 18th century, providing the model even for Russian maps of this frontier. The eastern shore, however, reflects much more current knowledge: the 1719-1721 charting of the Caspian Sea by Karl Van Verden. Also, the roads indicated linking the region's cities do not appear on Olearius' original maps, however they do appear on De l'Isle's 1723 map of the Caucasus. It is interesting to note that neither Van Verden's charting of the southwestern Caspian nor that of De l'Isle has here replaced that of Olearius, whose detail Homann seems reluctant to abandon.

Impetus for This Map

The present work displays those territories of the Caucasus that were captured from Safavid Iran by Tsar Peter I during the 1722-23 Second Russo-Persian war: Dagestan, Shirvan and Gilan. These Russian gains would not last - Peter's successor Anna Ioannovna returned the territories to Persia in the 1732 Treaty of Resht.

Armenia is marked here as a province of Iran - despite its having been predominantly occupied by the Ottoman Empire from 1623 to 1730. Yerevan (Erivan here) appears at the western edge of the map. In the Armenian mountains at the border with Georgia, Mount Ararat is named, and Noah's Ark is at on its peak.

As is frequently the case with Homann maps, the present work is rich in descriptive illustration. This extends to the topographical illustration: the region's mountainous terrain is indicated pictorially. The scale cartouche in the lower left is framed with palm trees and vineyards. The view of Terek is framed with two Circassian Tatars (identified by the sheep sacrifice mounted on a pike, a custom described by Olearius in his book). The base of the image is decorated with spears, arrows, scimitars, and axes, to emphasize the military nature of the post.

The title cartouche, framed against a caravan tent, depicts a silk-robed Persian merchant conversing with a Persian soldier. In the background is a caravan of heavily-laden camels and horses. In the foreground are a pair of dogs: symbols of vigilance and loyalty, they may allude to Russian or Persian vassal states in the region, guarding the borders of their respective empires.

This map was engraved by Ruprecht Adam Schneider in 1728 for inclusion in the Homann atlases. The separate map is well represented in institutional collections and appears occasionally on the market.


Adam Olearius, or Ölschläger (September 24, 1599 – February 22, 1671) was a German scholar, mathematician, geographer and librarian. He is best known for his published reports of his travels to Safavid Persia. He was educated in Leipzig; after his studies he became librarian and court mathematician to Frederick III, Duke of Holstein-Gottorp. In 1633, he was appointed secretary to the Duke's embassy to Muscovy and Persia. Although the embassy - meant to establish the Duke's city of Friedrichstadt as the European terminus of a prospective overland silk route - was only partially successful, the embassy's journey down the Volga and to the Caspian Sea provided Olearius with the basis for some of the earliest descriptions of those regions based on actual observation; Olearius was responsible for the introduction of much of Persian literature and culture to Europe for the first time.

On his return, the Duke made Olearius his librarian and keeper of his cabinet of curiosities - a wise choive, as under his curation the Gottorp library and cabinet were greatly enriched in manuscripts, books, and works of art. Learn More...


Ruprecht Adam Schneider (fl. 1727-1760), also known as R.A.S. or Schneider the Younger, was a German engraver and artist who engraved for Johann Baptist and Johann Christoph Homann. As with many engravers, his education and life details are obscure. Learn More...