1893 Trekking Map of Gosainkund and Helambu in Nepal 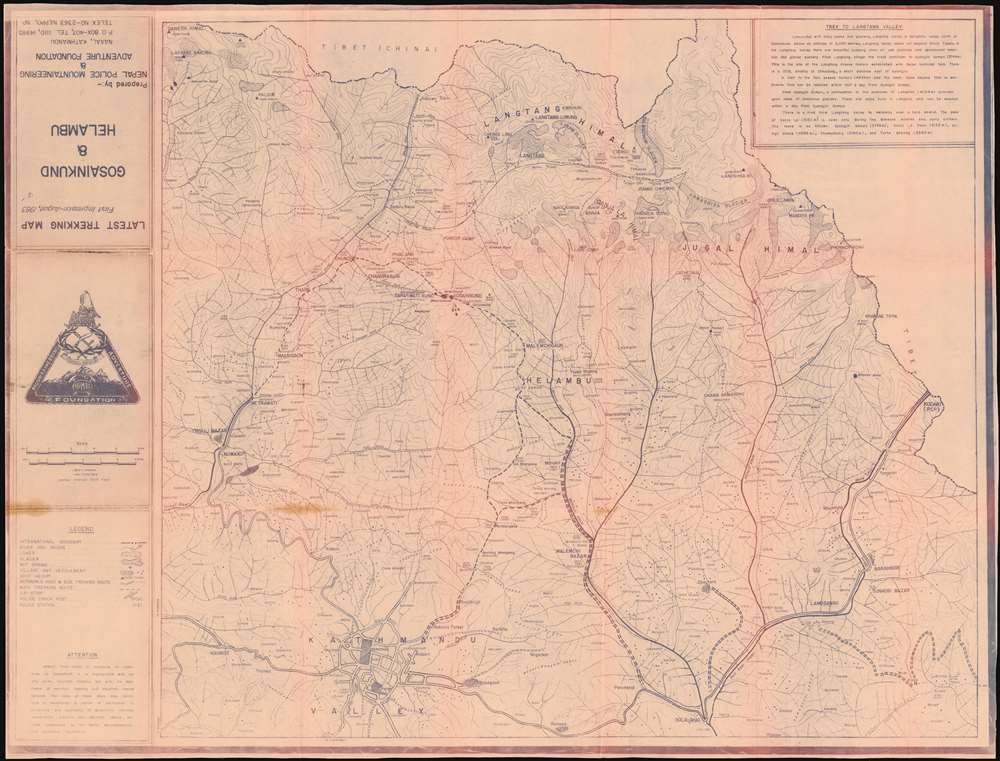 1893 Trekking Map of Gosainkund and Helambu in Nepal

This is a 1983 Nepal Police Mountaineering and Adventure Foundation cyanotype map of the trekking routes from Kathmandu to Gosainkunda lake in Nepal's Langtang National Park, and the Helambu region. Gosainkunda, in particular, is a place of great religious significance, and is a major pilgrimage destination.

The cyanotype map shows rivers and bridges, lakes glaciers, hot springs, villages and towns, passable roads, as well as air strips, police stations and check posts. The map covers the region between the Tibetan border and Kathmandu, and is peppered with hundreds of settlements - many too small to be named. The mountainous topography is shown with great detail, using gradients and altitudes above sea level.

This map was printed in 1983 by the Nepal Police Mountaineering and Adventure Foundation. While it is not known how many were produced, the mimeograph printing process used was not conducive to long print runs. While we are aware of other maps printed by the NPMAF in price records and institutional collections, we see no other examples of this one. There are no listings of it in OCLC.

The Nepal Police Mountaineering and Adventure Foundation was established by Nepalese Police Inspector General Khadgajeet Baral in about 1977 in order to establish mountaineering regimes for Nepali police officials, and to promulgate both mountain conservation and mountaineer rescue services. The NPMAF produced a series of trekking maps in the 1980s, sold in order to support these activities. Learn More...

Good condition. Toning of mimeographed image at folds, some mended wear at junctures.