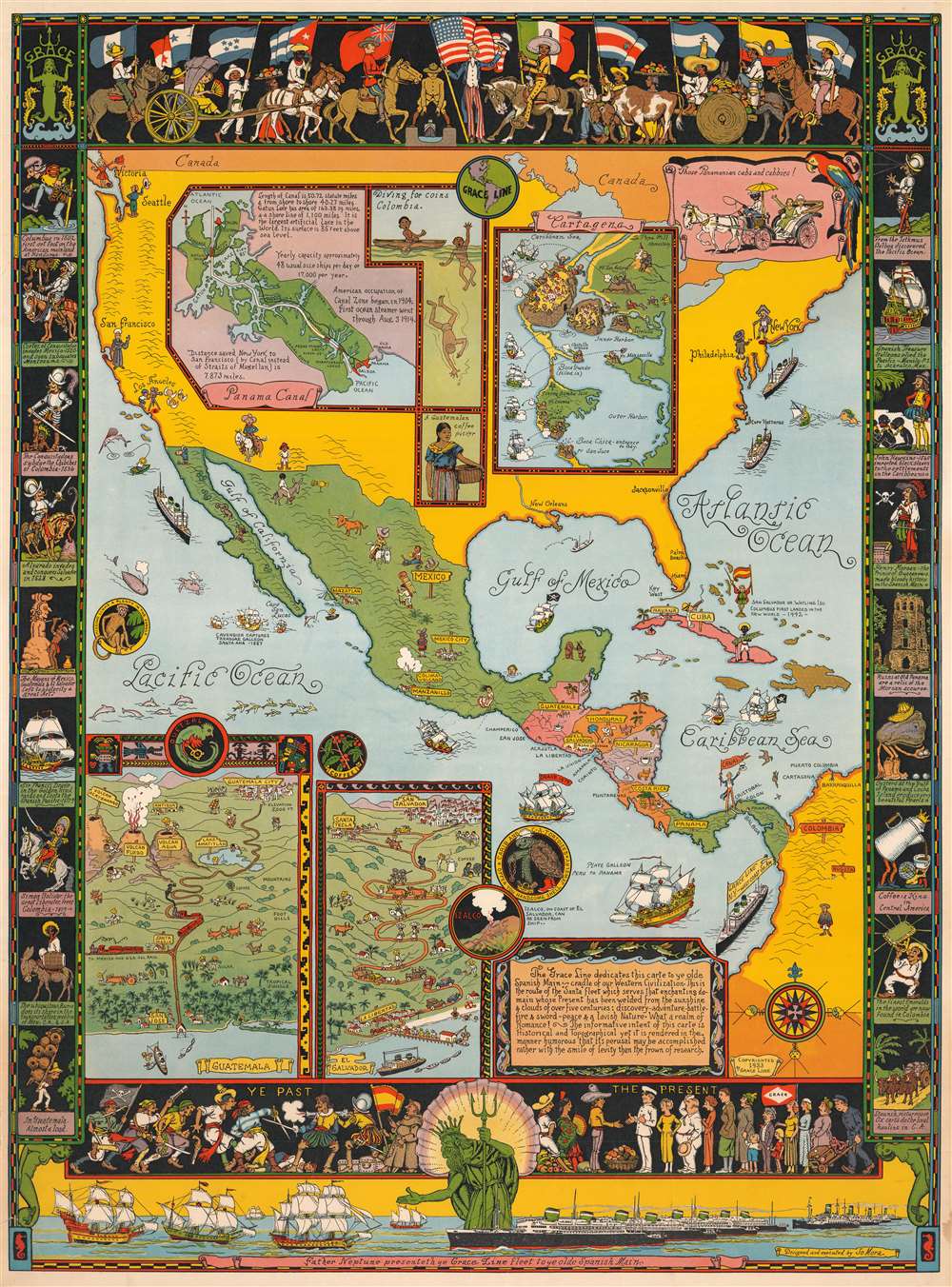 This is a rare 1933 Jo Mora pictorial map of Central America commissioned by the Grace Line to celebrate and advertise its newly-launched passenger service from New York City to Seattle via the Panama Canal. Focused on Central America, the map depicts North, Central, and South America and focuses on ports of call of the Grace Line. The whole map is dedicated to the memory of the Spanish Main, which is referred to as the 'cradle of our Western Civilization'. Mora also includes a disclaimer of sorts just below this dedication, stating

The informative intent of this carte is Historical and Topographical yet it is rendered in the manner humorous that its perusal may be accomplished rather with the smile of levity than the frown of research.

Beginning in New York or Seattle, depending on which direction one is traveling, a Grace Line cruise would take three weeks. Passengers were encouraged to explore the many cities along the way, and 'conducted excursions' were offered, for a small cost. Nearly all the waypoints along the route are highlighted by pictorial vignettes, as are several other locations. Starting in New York, both New York City and Philadelphia are marked by men in 18th-century garb. Two cruise liners appear on the coast, one heading south and the other north. The next port of call is Havana, Cuba, personified by a man smoking a Churchill-sized cigar. Mora also includes an illustration of Christopher Columbus standing on tiny Watling Island, no far off the coast of Cuba, holding a Spanish flag and a sword to commemorate his 1492 landing in the New World.

From Havana, a Grace Line cruise proceeded to Puerto Colombia, before heading to Cristobal, Costa Rica, and the trip through the Panama Canal, marked by Uncle Sam holding a banner reading 'CANAL.' After transiting the isthmus, passengers were treated to stops in Balboa and Puntarenas, Costa Rica; La Libertad, El Salvador; San Jose, Guatemala; and Mazatlán, Mexico, before arriving in Los Angeles, California. The steamer would then continue on to San Francisco, and Victoria, British Columbia, before finally arriving in Seattle, Washington. The comical personifications of these cities resume in Los Angeles, where a movie director is illustrated filming three smiling angels. A Franciscan monk personifies San Francisco, while a young woman (presumably named Victoria…) waves from Victoria across the Salish Sea to a cowboy in Seattle.

The Map's Many Insets

Four inset maps provide detailed views of Grace Line voyage stops. Four insets occupy the continental United States. Moving from left to right, the first inset is a detailed depiction of the Panama Canal. Each section of locks is illustrated, as is the Panama Railroad which runs along the Canal from Colon to Balboa. A second inset map of Cartagena illustrates the city's historic fortresses being shelled, and responding in kind, by a fleet of men-of-war. Two insets separate the two maps. One depicts Colombian diving for coins and the other is a portrait of a Guatemalan coffee picker. An illustration of the Grace Line logo is also included.

Two insets situated along the bottom border illustrate Guatemala and El Salvador. San Jose de Guatemala is located on the left, with locals riding horses, an active volcano, and Guatemala City farther inland. La Libertad, El Salvador is on the right and the road between La Libertad and San Salvador is the main focal point.

While the central map is delightful, Mora's talent for comic illustration is evident in the border as well. A parade of nations occupies the top border, with Uncle Sam and the American flag at the center. An American World War I soldier, a 'doughboy' is illustrated straddling the Panama Canal to the left of Uncle Sam, while people from North, Central, and South American meet in the middle, with Canada and Mexico flanking Uncle Sam. Vignettes of historical events create the side borders. Some of the important figures illustrated are Christopher Columbus, Hernan Cortes, Francis Drake, and Simon Bolivar. Mora also references the slave trade, Caribbean piracy, the Mayans, and the bloody wars in Colombia and Salvador. The past and the present meet along the bottom, where conquistadors and pirates fight to the death on the left while civilized travelers on a Grace Line voyage meet and shake hands with locals on the right. Perhaps the most charming element of the entire map, however, is situated along the very bottom. Here, Mora has placed an illustration of Neptune introducing the Grace Line fleet to the frigates and men-of-war of the Spanish Main.

This map was created by Jo Mora and published by Grace Line in 1933. We are aware of examples in institutional collections at the Newberry Library, the California Historical Society, and the David Rumsey Map Collection at Stanford University. Rare to the market.

Good. Closed tears extending one-quarter of an inch (.25) and one-half of an inch (.5) into the printed area (respectively) professionally repaired on verso. A small area of infill along the left margin. Blank on verso.