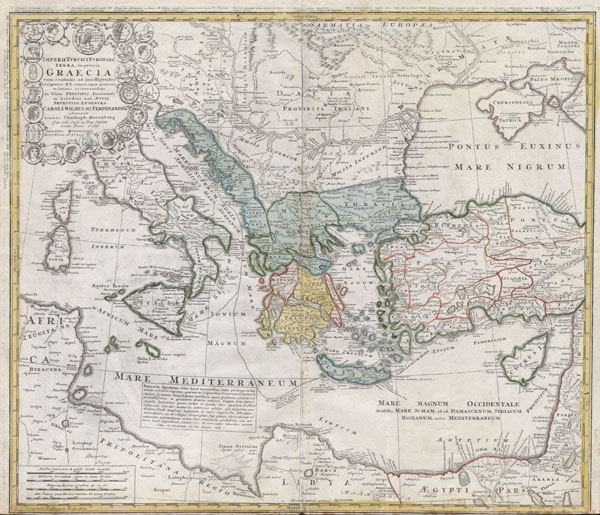 This is one of the Homann Heirs finest and most appealing maps of the ancient Greek World. Map centers on Greece but includes the entirety of the eastern Mediterranean and North Africa. Also includes the Black Sea as far as the Crimea and the sea of Azov. Extends north as far as Sarmatia and Pannonia. Includes Italy, Sicily, Corsica and Sardinia. Upper left quadrant features a decorative title cartouche adorned with the rectos and versos of 12 ancient Greek coins with explanatory numbered references outside the top border of the map. Show the important Greek provinces and colonies through the Mediterranean, especially in modern day turkey and in the Italian peninsula. Includes nautical military and trade routes. This map was drawn by Joanes Christoph Harenberg for inclusion the 1752 Homann Heirs Maior Atlas Scholasticus ex Triginta Sex Generalibus et Specialibus…. Most early Homann atlases were 'made to order' or compiled of individual maps at the request of the buyer. However, this rare atlas, composed of 37 maps and charts, was issued as a 'suggested collection' of essential Homann Heirs maps. A fine copy of an important map.