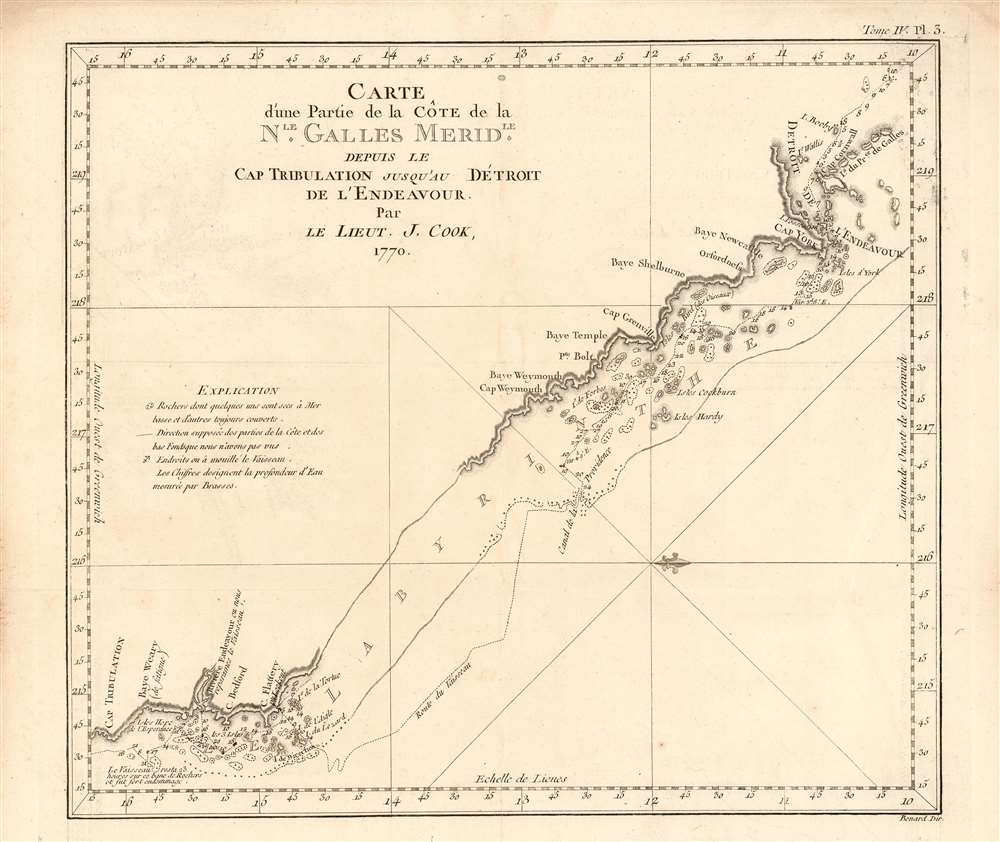 French Edition of the First Chart of the Great Barrier Reef!
$400.00

This is the 1774 first French edition of the first chart to detail the Great Barrier Reef, discovered by the legendary navigator James Cook during his first voyage aboard the H.M.S. Endeavor. This west-oriented chart captures the great explorer's difficult journey along the coast of Australia from Cape Tribulation to Cape York, during which he became the first European to navigate - with difficulty, and under duress - the Great Barrier Reef, which he tellingly named 'The Labyrinth.'

The southernmost extent of this chart is 'Cap Tribulation,' so called by Cook because 'here begun all our troubles.' There on June 10, 1770, the Endeavor struck a reef northeast of the cape, and then ran aground on what is now named Endeavour Reef. This site bears the note (in French) that 'the ship remained 23 hours on this rock and was badly damaged.' Cook and crew were forced to throw overboard some fifty tons of cargo and supplies in order to float Endeavour off the rocks, but was finally able to limp to shore and beach the ship for repairs at the mouth of the Endeavour River, also shown.

The ship having been repaired, Cook then had to find his way first around, then through what he himself termed an 'insane Labyrinth' of coral. From a hill near Endeavour River, Cook observed

'with great concern, innumerable sand banks and shoals lying all along the coast in every direction… the outermost extended as far as I could see with my glass, and many of them did but rise over water.'

Thus one of our greatest natural world heritage sites presented itself to its discoverer: a forbidding and deadly obstacle. With great difficulty, on August 13, Cook was able to navigate to open water and steer free of 'The Labyrinth' for a time but as the chart shows, he was compelled to venture in to the Reef again. The danger and difficulty of this passage is made apparent on the chart with its many depth soundings, turns and setbacks. This perilous journey continued up the coast to Cape York, when the Endeavor was finally able to leave the Labyrinth behind.

This map was engraved by Robert Bénard for the 1774 French edition of James Hawkesworth's 1773 account of Cook's voyages. It follows the 1772-1773 English edition engraved by William Whitchurch and published in 1773. While Hawkesworth's book is well represented in institutional collections, this separate map is catalogued only by the National Library of Australia in OCLC.

Very good condition. One wormhole at centerfold with no loss to printed image, else excellent condition with full margins.