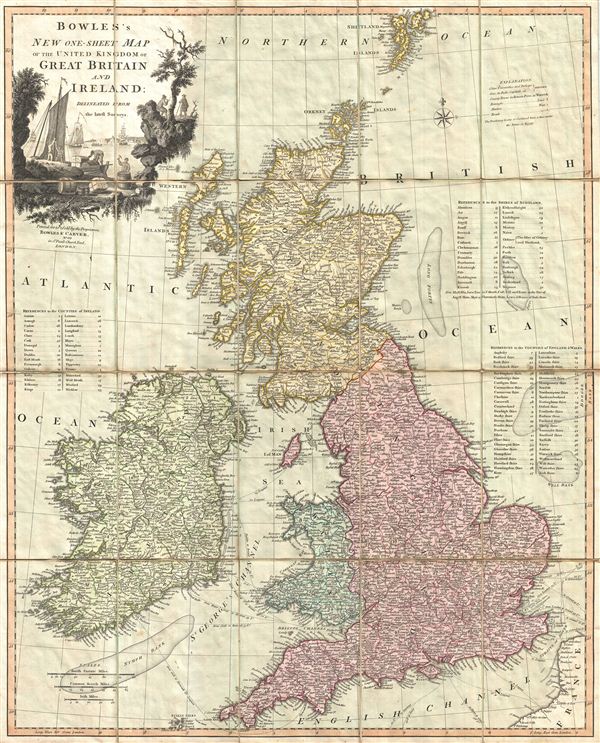 A surprisingly scarce 1801 case or pocket map of the British Isles, including england, Scotland, and Ireland, by Carrington Bowles and Samuel Carver. Bowles' map covers all of the British Isles from the Shetland Islands south to the Scilly Isles and from western Ireland to the Straits of Dover. Nautical routes between england and Ireland as well as between england and the european mainland are noted. Some offshore detail, in particular the Nymph Bank and the Long Fortys are identified. The lands themselves are subdivided into counties (england, Wales, and Ireland) and shires (Scotland) with numerical reference tables to the right and left sides of the map. An appealing decorative title cartouche appears in the upper left quadrant depicting maritime cargo being loaded unloaded from a busy harbor – possibly Bristol?

Bowles and Carver issued their 'one-sheet' maps series from approximately 1792 to 1801. The series consisted of independent issue maps of nearly every part of the world, prepared either in broadside, wall, or case formats, upon request. Some of the maps in this series are highly sought after and historically important, however, most examples appear on the market with some regularity. This map, curiously, is the exception, as we have been able to identify no other examples in either private or institutional collections and no auction record whatsoever. Given the title, New one-sheet Map of the United Kingdom of Great Britain and Ireland' we can assume that this is indeed a 'New' map, drawn to reflect the January 1801 merger of the Kingdom of Great Britain and the Kingdom of Ireland in to a new singular 'United Kingdom.' At the time this was a popular union and strongly supported by the mostly Catholic Irish population, however, by the 1820s the union had fallen out of favor and calls for an independent Irish parliament grew. even so, Ireland remained part of the Kingdom for nearly 100 years until, in 1922, following the Irish War of Independence, an independent state began to emerge. Given the scarcity of this map, we must presume that it enjoyed a very short run.

Very good condiiton. Dissected and mounted on linen in 20 panels. Folds into original case. Original linen in generally good condiiton with only minor splitting.
Looking for a high-resolution scan of this?