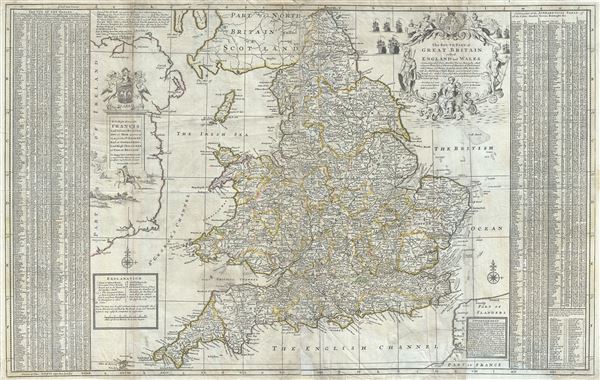 This is a fascinating 1710 Herman Moll map of South Britain, or England and Wales. It depicts the entirety of England and Wales, including the Isle of Man. The map is extremely detailed, noting cities, roads, towns, bishoprics, archbishoprics, distances between towns, rivers, and a host of additional topographical features. This map also offers splendid detail throughout with respect to undersea shoals and reefs in the surrounding waters. An exhaustive alphabetical list of the towns of England and Wales, a list of parliamentary constituencies, is included along the left and right borders of the map.

The Wall of Hadrian or Picts Wall, fortifications built by the Roman Empire to defend against the unruly tribes of the north, are identified.

The top right quadrant of the map features a large ornamental title cartouche which includes the coat of arms and a fleet of ships. Another cartouche near the top left features a dedication to 'Francis lord Viscount Rialton' with the Godolphin family coat of arms and a country scene depicting horse riders. This map was created by Herman Moll in 1710.