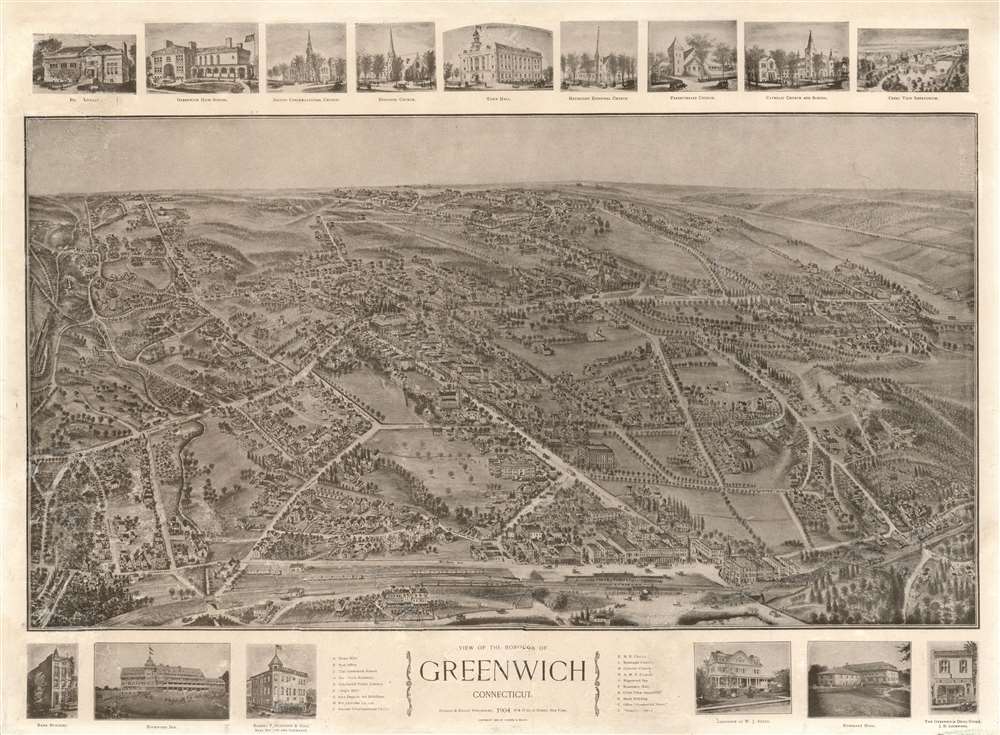 This is the sole recorded example of Hughes / Bailey 1904 bird's-eye view of Greenwich, Connecticut. Presenting the town and its surrounds amidst rolling, wooded hills, the view encompasses the area roughly bounded by Railroad Avenue in the south, Old Church Road to the East, and Oakridge Street to the west. North Maple Avenue can be spied in the distance. Streets are labeled on the view itself. The town's buildings are rendered in detailed perspective.

As is traditional with such views as this, the map is bordered at top and bottom with an array of fifteen architectural views. While most of these are reproduced from drawings, at least three are plainly sourced from photographs of their subjects: Edgewood Inn, the residence of W. J. Smith, and Rosemary Hall.

In 1904, Bailey was in his early 60s. At an age when most men would be looking toward retirement, the Bailey entered into a new business, partnering with the younger Thomas S. Hughes. Under the imprint of 'Hughes and Bailey', the duo traveled throughout New York and New England, revisiting the sites of Bailey's earlier views. In each, they painstakingly made new views, what they called 'aero-views' from the same perspective point of the earlier view, but 20 - 40 years later. Most were artistic renderings, like the earlier views, but some incorporated photography. These were then printed using half-tone copper plate process - considerably cheaper than the older stone lithographs. The marketing angle, evident in numerous newspaper advertisements from 1904 to 1926, was to set the old and new side by side thus illustrating change and growth. They worked together on these views, as is described in an article appearing in the March 29, 1912 issue of the Norwich Bulletin,

It has taken the artists eight months of hard and faithful work to go through the streets and sketch each building separately. They did most of their work during the summer months. It is quite amusing to hear them relate some of their experiences, having been mistaken for burglars, prospective real estate promoters and curiosity seekers.

Hughes and Bailey remained partners for over 20 years, pushing Bailey well into his 80s - nothing to the vigorous man who lived to 104.

This view was drawn by Oakley Hoopes Bailey and Thomas S. Hughes, and published under the imprint of 'Hughes and Bailey'. This view is extremely rare: we are aware of no other examples having surfaced on the market, there are no examples in OCLC, and the Library of Congress - which has a large number of Hughes and Bailey prints - does not have this view in their collection. The only surviving example.


Thomas S. Hughes (fl. 1904 - 1926) was an American viewmaker active in the early years of the 20th century. Hughes is an elusive figure before and after his viewmaking career - due in part to the commonality of his name. In 1904 Hughes partnered with the venerable Oakley Hoopes Bailey (1843 - 1947), who was then in his 60s. The duo traveled throughout New York, New Jersey, and New England, revisiting the sites where 20-40 years earlier, Bailey made his own views. There they made new views, illustrating the development and change that occurred over the intervening period. The 'Hughes and Bailey' Aero-Views as they were known are universally copper half-tone images - suggesting that Hughes implemented modern photo-mechanical printing technology and even photography to enhance the viewmaking process and printing. Hughes appears to have moved around a lot. When the partnership was founded, he was living in Brooklyn. His wife died in that year, shortly after the firm was founded. By 1912, he is noted has having relocated to Cambridge, Boston. The last Hughes and Bailey view appears in 1926. After this time, there is no verifiable record of Hughes. Learn More...

Good. Photomechanical print, reinforced and stabilized.
Looking for a high-resolution scan of this?