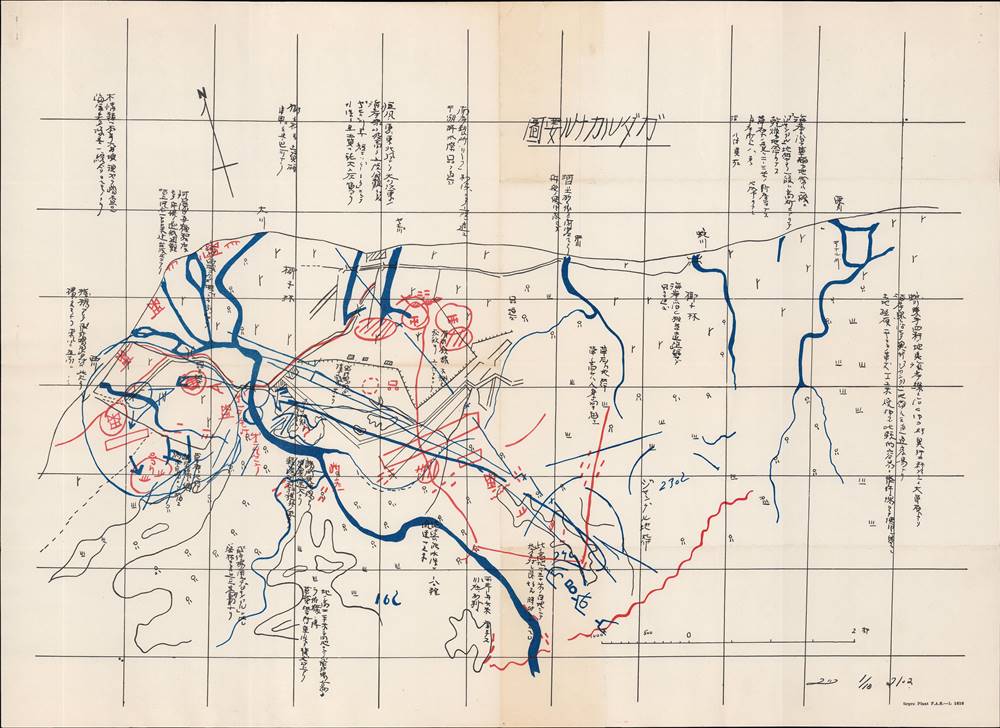 Japanese intelligence map from the decisive battle of the Pacific War.
$950.00

A unique 1942 U.S. Army Map Service print of a Japanese military intelligence manuscript map of Guadalcanal, Solomon Islands. It details, from a Japanese perspective, the early stages of the Guadalcanal Campaign, a critical turning point in the Pacific Theater of World War II (1939 - 1945). Written entirely in Japanese, the map shows American positions around Henderson Field, the strategically important airstrip that was the main objective of both sides in the months-long battle for the island.

Mapping the Battle for Guadalcanal

This map was originally made by a Japanese military intelligence unit and appears to be from September 1942, around the time of the Battle of Edson's Ridge (the note at top-left refers to reconnaissance undertaken in September). In addition to geographic features, it shows American positions, movements (blue arrows), and strongholds (red ovals and rectangles). The airfield, focal point of the entire campaign, is at center.

The notes in black and occasionally red ink relate to terrain, elevation, and distances between strategic points. These seem rather mundane at first glance, but in fact were essential considerations when soldiers battled the environment, disease, and starvation as much as the enemy.

The months-long battle for Guadalcanal took place at a critical moment in the Pacific War. The Allies had inflicted heavy losses on the Imperial Japanese Navy at the Battle of Midway, but the overall situation was uncertain, as Japanese units were still advancing in Southeast Asia. The Allies were eager to launch a counter-offensive to halt Japanese progress that threatened to cut their lines of communication and supply in the Pacific, and decided to focus on the Solomon Islands. By chance, the Japanese had recently occupied Guadalcanal and, using Korean forced laborers, had begun building a large airstrip that could pose a major threat to Allied shipping. Thus, the Allies decided to launch an amphibious assault on the island.

The first phase of the campaign went smoothly for the Americans and the airfield (which they renamed Henderson Field) was quickly captured, but problems arose as Japanese naval and air attacks forced support ships to retreat, leaving the marines on the island with limited supplies. Then, dysentery struck, incapacitating many marines and greatly reducing their ability to fight (for their part, Japanese troops suffered from extensive malnutrition and disease that became much worse as the battle wore on). Japanese reinforcements quickly arrived and tenacious frontal attacks were launched with the aim of retaking the airfield.

From mid-August 1942 through January 1943, land, sea, and air battles raged on and around Guadalcanal, as both sides came to see the campaign as a decisive one. Repeated attacks by the Japanese failed to dislodge the Americans and depleted Japanese ranks as fast as reinforcements could arrive (the Americans were greatly aided by 'Coastwatchers' and other native inhabitants of the Solomon Islands who acted as scouts). By the end of October, the Americans began a slow and difficult offensive through the jungles and mountains of the island. By the end of December, the Japanese had decided to retreat, a process carried out over the following several weeks.

In the end, both sides suffered staggering losses, the Allies mostly at sea and the Japanese mostly on land. However, Allied loses were easily replaced while Japan lacked the population and industrial capacity to replenish its forces, a dynamic that became clear in the course of the campaign. By committing so heavily to Guadalcanal, the Japanese diverted resources from other campaigns, allowing the Allies to take the initiative. Following the Guadalcanal Campaign, the Pacific War shifted clearly in the favor of the Allies and Japan was consistently on the defensive.

This map was originally a Japanese military intelligence map, most likely made in September 1942. The text at bottom-right ('Repro Plant F.A.S.') suggests that it was reproduced by the U.S. Army Corps of Engineers' Map Reproduction Plant (merged in 1942 with the Army's Geographic Section to form the Army Map Service). It was likely captured from a Japanese officer following one of several unsuccessful frontal assaults on American positions. It is not known to exist in any institutional holdings and has no known history on the market.

Very good. Some discoloration along fold lines and margins.