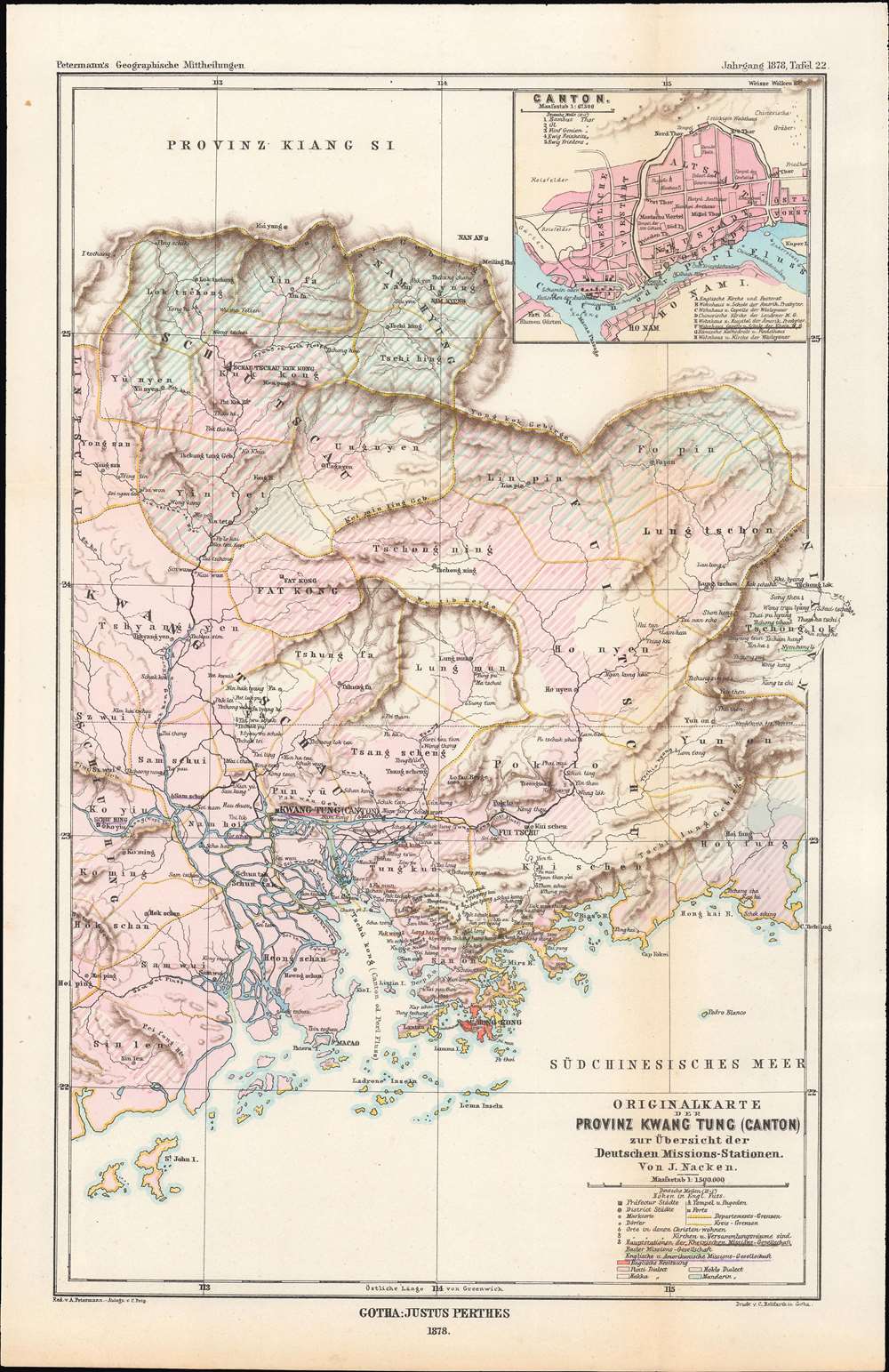 Missionaries in China and social upheaval.
$450.00

This is an 1878 Rev. Johannes Nacken map of the German mission stations in Guangdong Province, China, originally published in the geography journal Petermann's Geographische Mitteilungen. The map is indicative of the level of geographic and cultural knowledge about China in Europe at the time.

Contrary to the title, in addition to German mission stations, Protestant missions of other nationalities (American, British, and Swiss) are also indicated, along with Christian communities and churches (though not Roman Catholic missions). The color shading on the map shows the predominant language or dialect in various parts of the province, with Punti (Cantonese) being dominant.

Although generally accurate, elements of the maker's geographical knowledge were evidently shaky. The city of Guangzhou (Canton) is called Guangdong ('Kwang-tung'), while the word Guangzhou ('Kwang Tschau') is written across the province. Moreover, directly north of Canton is Jiangxi ('Provinz Kiang Si') when that area should be Hunan. Jiangxi is farther to the east. Also, much of Guangdong province to the east and west is cut off. These errors and omissions are odd since German missionaries had been in China for decades by this point, but they indicate what is also clear from the placement of German mission stations: German missionaries had not spread far beyond the Pearl River Delta, and their detailed geographic knowledge was limited to that area.

An inset map of Guangzhou (1 : 67500) is included at top-right. Towards the bottom-left of the inset is Shamian Island (沙面), where Europeans had originally been allowed to settle and set up trading 'factories' under the Canton System of Trade preceding the Opium Wars. To the northeast is the walled city ('Alt Stadt') of Guangzhou. Despite the presence of foreign missionaries and Christian churches, the city's Confucian temple, multiple other temples and pagodas, an imperial examination hall, and halls for native place associations ('amthaus‘) show that Guangzhou in many ways remained a typical Chinese city of the late imperial period.

Although Christian missionaries travelled to China as early as the Tang Dynasty and perhaps even earlier, modern Christian missions began with the arrival of the Jesuits at the end of the 16th century. The Jesuits gained some prominent converts, but due to pressure from the Chinese Court, competing missionary societies, and the Holy See, their actions were limited, and they were ultimately confined to Beijing as servants to the emperor.

The treaties that followed the First Opium War (1839 - 1842) removed many of the preexisting restrictions on proselytization and allowed missionaries to travel and preach throughout China, often leading to anti-Christian agitation and violence. Catholic missions tended to be dominated by the French, while Americans and Brits were similarly prominent among Protestants, though missionaries came from many other countries including Germany, the Low Countries, and Scandinavia.

Protestant converts tended to be small in number but very devout, though their localized interpretations of Christianity did not always please foreign missionaries, as with the Taiping Heavenly Kingdom or the later True Jesus Church. This sentiment, what one scholar has called the 'hermeneutics of suspicion,' added to a general disparagement of Chinese culture among missionaries, far different from the Jesuits of the 16th-17th century. In the early 20th century, particularly after World War I, when the flaws of Western culture became apparent, missionaries generally shifted back towards a greater respect for Chinese culture and traditions.

One takeaway from this map is that Hakka areas of Guangdong saw higher rates of conversion to Christianity than non-Hakka areas. Hakka (literally 客家 'guest families') was a somewhat vague term applied to migrants who had come to southern China from further north at various points over the centuries. They spoke a distinct dialect and maintained cultural traditions different from those of their new neighbors. At the same time, they were generally confined to hillsides and unproductive land, leaving them as a marginalized group over generations, and occasionally as a target of violence at the hands of Cantonese and other local populations.

In 19th century China, these problems became especially acute because of overpopulation and land shortages, as well as a new wave of migrants fleeing warfare to the north, including that caused by the Taiping Rebellion. Incidentally, Hong Xiuquan and other early leaders of the Taiping were also Hakka, and Hakka suffered wholesale reprisals by Qing troops while the rebellion was put down. The competition for land and survival set off the Punti–Hakka Clan Wars in the 1850s and 1860s, killing several hundred thousand people in the process.

The conversion of marginalized groups by missionaries is a pattern seen throughout the world in this period (and others). Conversion meant access to education and opportunities that would have been difficult to obtain otherwise, along with a sense of self-worth and hope for salvation for groups that had been discriminated against.

This map was created by Johannes Nacken and published in 1878 in the journal Petermann's Geographische Mitteilungen. It is held by the British Library and University of Chicago, and scarce to the market.

Rev. Johannes Nacken (fl. c. 1867 - 1878) was a German Protestant missionary and member of the Rhenish Missionary Society who operated a medical dispensary near Guangzhou in the 1860s and 1870s. He was apparently adept with both English and Chinese, publishing articles in English-language journals in Guangzhou and Hong Kong as well as becoming an expert on the 13th century lexicographical work Liushugu 六書故 by the scholar Dai Tong (戴侗). Learn More...

OCLC 70550383. Wu, Albert Monshan, From Christ to Confucius German Missionaries, Chinese Christians, and the Globalization of Christianity, 1860-1950 (Yale University Press, 2016).
Looking for a high-resolution scan of this?