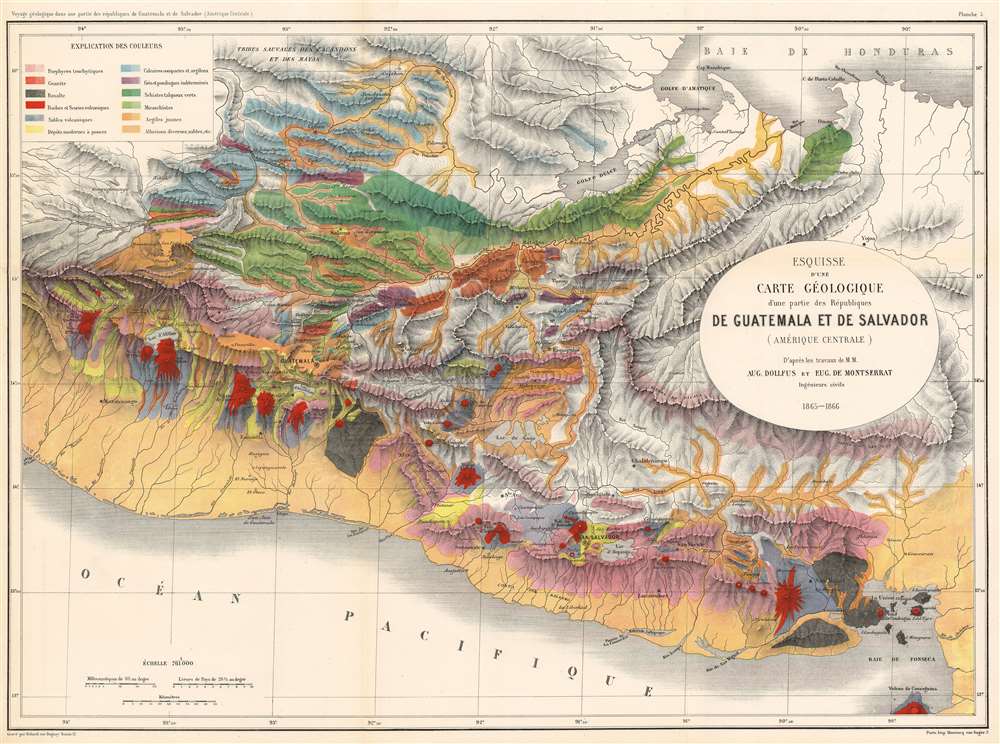 A stunning 1868 large format geological map of Guatemala and El Salvador by Auguste Dollfus and Eugène de Montserrat. The map covers from the Bay of Honduras to the Pacific and from roughly modern-day Port Chiapas, to the Gulf of Fonseca. Color coding illustrates geographical features with an emphasis on volcanic activity (red), and drainage systems (yellow). This is the most comprehensive study of Central American geology of the 19th century. It was compiled in conjunction with the Commission Scientifique du Mexique, the scientific arm of the Napoleon III's French Intervention in Mexico (1862 - 1867).

The Commission Scientifique du Mexique was a scientific collaboration between French and Mexican researchers that took place during the French Intervention in Mexico between 1864 to 1867. Napoleon III saw the expedition as a noble gesture in the model of similar scientific expeditions that accompanied the French invasion of Egypt during the Napoleonic Era. Although considered by most to be a failure, the Commission did successfully foster the development of arts and sciences in Mexico and yielded significant scientific research.

This map was published to accompany Dollfus and Montserrat's Voyage Géologique dans les Républiques de Guatemala et de Salvador, a sophisticated and comprehensive study of Central American volcanic activity. The map was engraved in Paris by Georges Erhard Schièble and printed by Monrocq Frères. Today this map and the corresponding work are extremely rare. We have identified only one example of the map in an institutional collection, at the Sorbonne.

Eugène de Montserrat (September 14, 1840 - March 21, 1917) was a Swiss-French engineer and geologist active in the middle part of the 19th century. Montserrat was born in Geneva. He studied at the École Centrale des Arts et Manufactures French Expeditionary Force's Commission Scientifique du Mexique, as a 'geological traveler more specifically in charge of the study of volcanic formations.' Along with fellow geologist Auguste Dollfus he traveled throughout Mexico, Guatemala, and Salvador climbing mountains, studying the region's unique geological makeup, and making detailed maps. Learn More...


Auguste Dollfus (March 30, 1840 - July 3, 1869) was a French geologist and naturalist active in Central America during the middle part of the 19th century. The son of a wealthy ship owner of La Havre, Dollfus was well traveled, and even as a child visited Europe, North Africa, Constantinople, Palestine and Egypt. In 1861he began studying at the École des Mines de Paris and, upon graduating, took a position with the French Expeditionary Force's Commission Scientifique du Mexique as a 'traveling photographer and paleontologist.' Along with fellow Geologist Eugène de Montserrat he traveled throughout Mexico, Guatemala, and Salvador climbing mountains, studying the region's unique geological makeup, and making detailed maps. He returned to Paris in 1867 to compile his research, which earned him a French Legion of Honor, but unfortunately, illnesses (Malaria?) contracted in Central America led to an untimely demise in 1869. He was just 29 years old. Learn More...