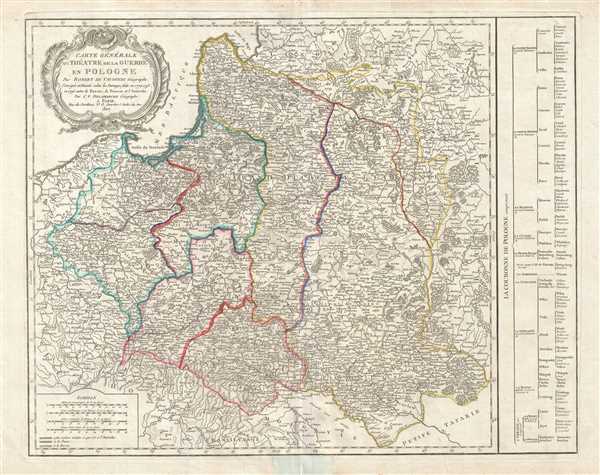 An extremely rare 1807 map illustrating the partitioning of Poland. The map extends from Poznan east to Russia and from the Gulf of Livonia south to Moldova and Hungary. The map is attributed to Robert de Vaugondy, and indeed the underlying cartography is based on early work by that cartographer, but it is in fact vastly updated and revised by Charles Delamarche, Vaugondy's successor. The map is intended to illustrate the partition of Poland between 1772 and 1795. In 1807 there was a great deal of interest in Poland among the French populace. Napoleon soundly defeated Russian forces in the June 14, 1807 Battle of Friedland, cementing his control of Central Europe. The subsequent signing of the Treaties of Tilsit by Tsar Alexander I of Russia and Napoleon Bonaparte of France. The Treaties created the Duchy of Warsaw, partially reconstituting the Pre-Partition 1772 Polish–Lithuanian Commonwealth. The Poles, and indeed, many French, full anticipated that Napoleon, after pushing into Russia, would complete the reconstitution by adding Grand Duchy of Lithuania. As such, the history of Poland's partition and the potential lands to be claimed, where a matter of great interest. Fast moving political events, nonetheless, soon shifted attention elsewhere and the interest in this map may have proven extremely ephemeral, possibly accounting for its extraordinary rarity.

The map employs color coding to identify territories divided by Austria, Prussia and Russia. The Poland here illustrated follows the 1795 Third Partition of Poland. Russia has annexed more the entire western half of the former Polish-Lithuanian Confederation. Austria seized the lands around Lwow and Krakow while Prussia claimed the territories to the north and west of Warsaw. By the mid-18th century Poland, due to an inefficient and corrupt internal bureaucracy, had lost much of its autonomy to its aggressive and powerful neighbors, Russia, Austria and Prussia. The First Partition occurred in 1772 with Prussia occupying Poland's long coveted western territories, Austria seizing Galicia, and Russia taking part of Livonia. In the aftermath of the First Partition, the Second Partition was almost inevitable. Poland allied with Prussia to thwart the ambitions of Russia in the east. This, along with a number of other factors, lead to the War in Defense of the Constitution between Poland and Russia. Largely abandoned by their Prussian allies, Poland could not hope to stand against the powerful Russian military. Poland's defeat resulted in the loss of nearly 50% of its remaining territory to Russia and Prussia, who signed an accord in 1793. The Third Partition of Poland in 1795 would dissolve what remained of the reduced Polish-Lithuanian Commonwealth, ending Polish all autonomy in the 18th century until Napoleon created the Duchy of Warsaw in 1807, the year this map was issued.

Originally created by Robert de Vaugondy, this map was issued in 1807 by Charles Delamarche. It does not regularly appear in Delmarche issues of the Atlas Universel so we may assume it was a separate issue. This map is consequently exceedingly rare. Only two examples are identified in the OCLC and the map does not appear in Pedley.