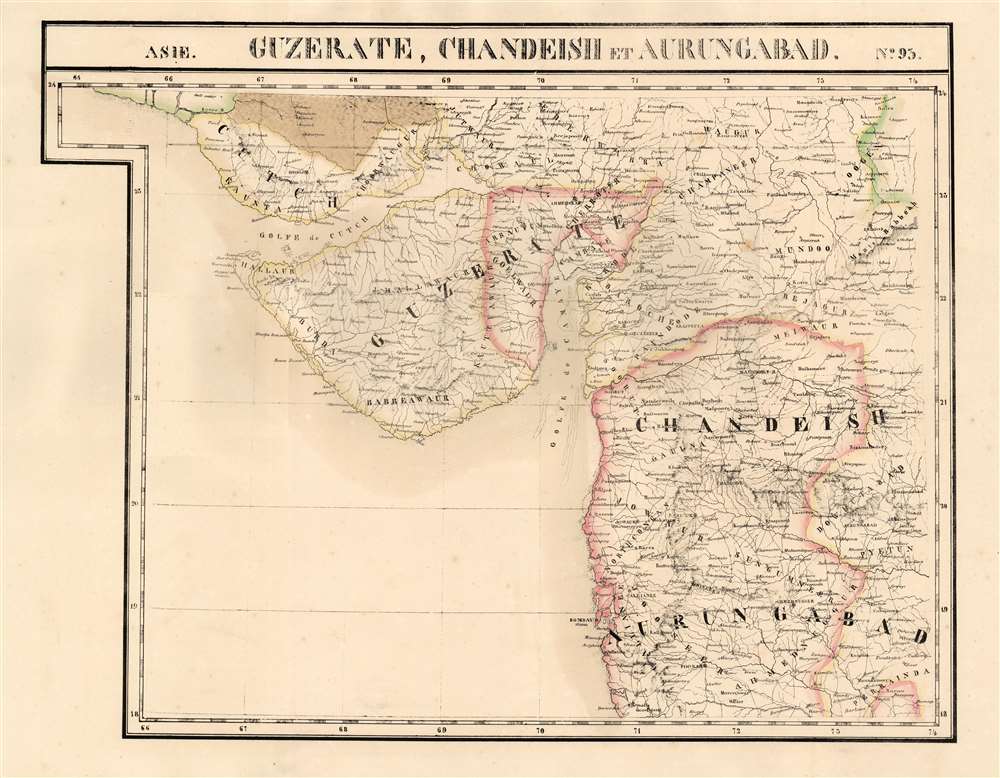 First lithograph map of Guzarat and the region around Mumbai, India.
$550.00

This is the 1827 Vandermaelen map of the Indian province of Gujarat, and the coastal part of what is now Maharashtra. It is the first large-scale atlas map to focus on the area, and the first to be executed in lithography. It includes the cities of Mumbai (Bombay on the map,) Surat (Soorut,) and Bhuj (Bhooj.) In the north, it shows part of the Great Rann of Kutch (the massive salt marsh in the Thar Desert) and extends as far south as Mhasala (Mheysala). The eastern reaches of the map include the cities of Ahmednagar, Aurangabad, and Indore in Madhya Pradesh. Topography is pictorial, illustrating the mountains and wetlands with hachures. Vandermaelen appears to have drawn heavily, but not universally, from the maps of Aaron Arrowsmith to inform his work here.

Philippe Marie Guillaume Vandermaelen (December 23, 1795 - May 29, 1869) was a Flemish cartographer active in Brussels during the first part of the 19th century. Vandermaelen is created with "one of the most remarkable developments of private enterprise in cartography," namely his remarkable six volume Atlas Universel de Geographie. Vandermaelen was born in Brussels in 1795 and trained as a globe maker. It was no doubt his training as a globe maker that led him see the need for an atlas rendered on a universal scale in order that all bodies could be understood in relation to one another. In addition to his great work Vandermaelen also produced a number of globes, lesser maps, a highly detailed 250 sheet map of Belgium, and several regional atlases. Learn More...