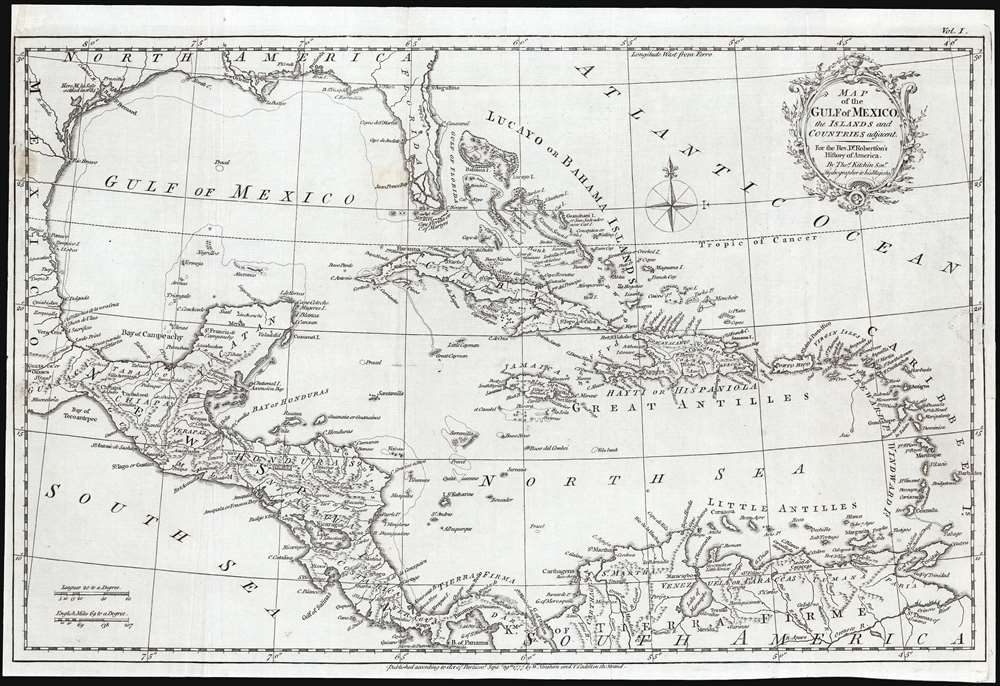 The Caribbean Theater of the Revolutionary War.
$400.00

This is an attractive 1777 map of the West Indies and the adjacent coasts of North, Central and South America, by the British cartographer Thomas Kitchin. The map includes Florida and the Gulf of Mexico in the north and west, the Central American coastline and the northern parts of South America extending to the mouth of the Orinoco River. Florida is unusually long, breaking into an archipelago at its tip, and with the St. John River extending almost its full length. Major towns and ports are marked throughout. New Orleans is shown and named. La Salle's settlement on Matagorda Bay - here named 'B. de St. Bernard' - is shown and dated 1685. A Spanish Presidio is also marked on the bay.

Kitchin's source for his map is French, specifically, Jean-Baptiste Bourguignin d'Anville's 1746 Amerique Septentrional. The very distinctively skinny Florida appearing here, the relatively accurate rendition of the Bahamas, the long sandbars connecting Grand Cayman with the Isla Pinos, and connecting Saba with 'Avis' in the Leeward Islands all point to a close relationship with the D'Anville map. Kitchin was not alone in his esteem of D'Anville's cartography. Many of the English engravers of the late 18th century relied on the French mapmaker as a source for the maps they produced for England's fast-moving publishing industry.The map is beautifully engraved, with mountains represented pictorially and the coastlines emphasized with hachure. It is embellished with an herbal-themed cartouche, and an elegant, simple compass rose.

This map was prepared by Thomas Kitchin for inclusion in the 1777 edition of William Robertson's History of America, published in London by William Strahan and Thomas Cadell. Robertson's History was reprinted several times, and this map appeared without change to the date in both the 1784 and 1792 editions of the book. In 1795 the date on the map was changed, and examples from that date onwards bear the 1795 date. We see perhaps nine or ten examples of the separate map catalogued in institutional collections; the book itself is well represented in OCLC.


Thomas Cadell the elder (November 12, 1742 - December 27, 1802) was an English publisher and bookseller. Born in Bristol, Cadell was apprenticed to a London bookseller named Andrew Millar in March 1758, and became Millar's partner in April 1765 after finishing his seven-year apprenticeship. He took over the business with the help of Millar's assistant following Millar's death in 1768. Not only was Cadell a successful bookseller, but he also found success in publishing, publishing poetry by Robert Burns, and works by jurist William Blackstone, economist Adam Smith, and Edward Gibbon's Decline and Fall of the Roman Empire. Cadell married the daughter of Reverend Thomas Jones on April 1, 1769, with whom he had two children, a son and a daughter. Cadell retired in 1793 and his son, Thomas Cadell the younger (1773 - 1836), took over the business. Cadell died at home of an asthma attack on December 27, 1802. Learn More...