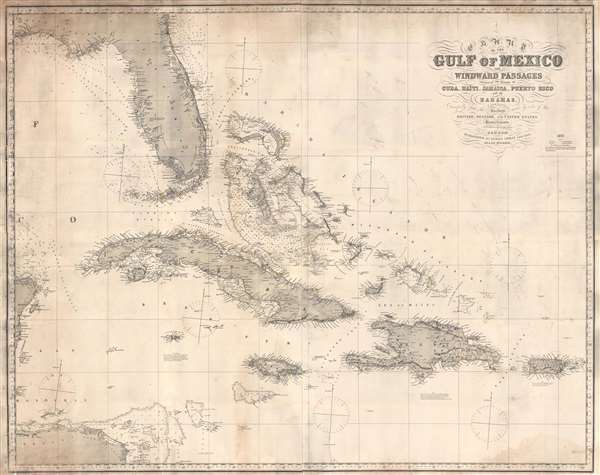 Working blueback nautical chart of the Gulf of Mexico and the West Indies.

This is an 1873 James Imray blueback nautical chart or maritime map of the Gulf of Mexico and the West Indies, including the Greater Antilles. The map depicts from Pensacola, Florida and the eastern tip of the Yucatan Peninsula to Puerto Rico and from Georgia to Honduras and the Mosquito Coast. Highly detailed, numerous depth soundings are included, particularly along the coast of the United States, the coast of Cuba, in the Bahamas. Locations throughout the region are labeled, mostly along the coastlines, but some inland locations are indicated on Cuba and Hispaniola. Havana, Pensacola, Cape Canaveral, St. Augustine, Port au Prince, and San Juan are among the locations labeled. Manuscript notations in the form of yellow dots mark the location of every lighthouse in the region from the Bay of Honduras and Pensacola to Puerto Rico.

This map was compiled and published by James Imray and Son in 1873. It owned jointly by Geographicus and Vetus Carta Maps.

Good. Full professional restoration. Soiling along top and bottom borders. Blank on verso.
Looking for a high-resolution scan of this?