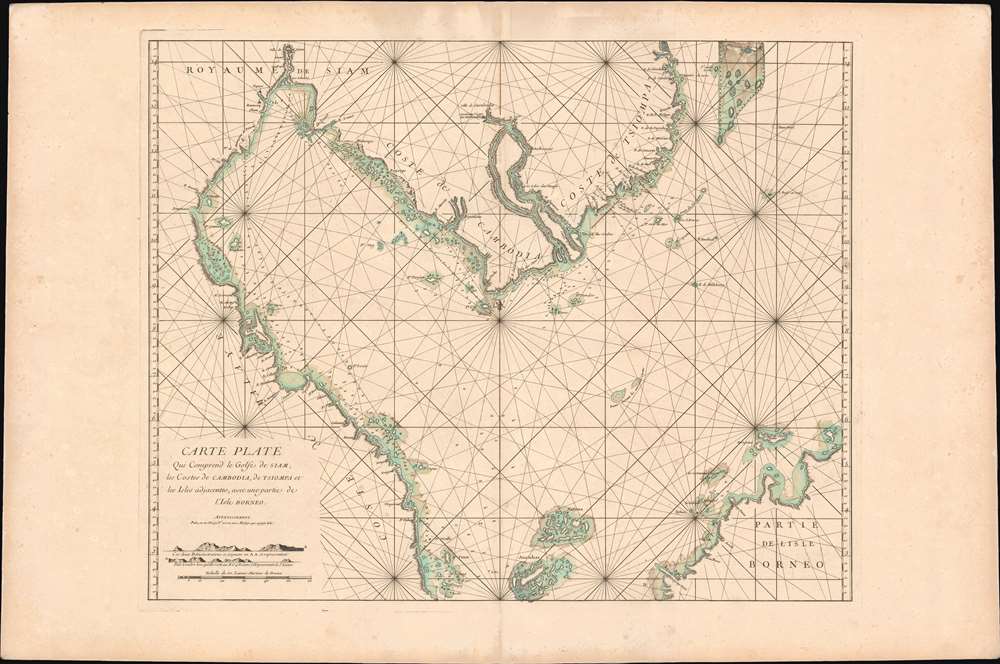 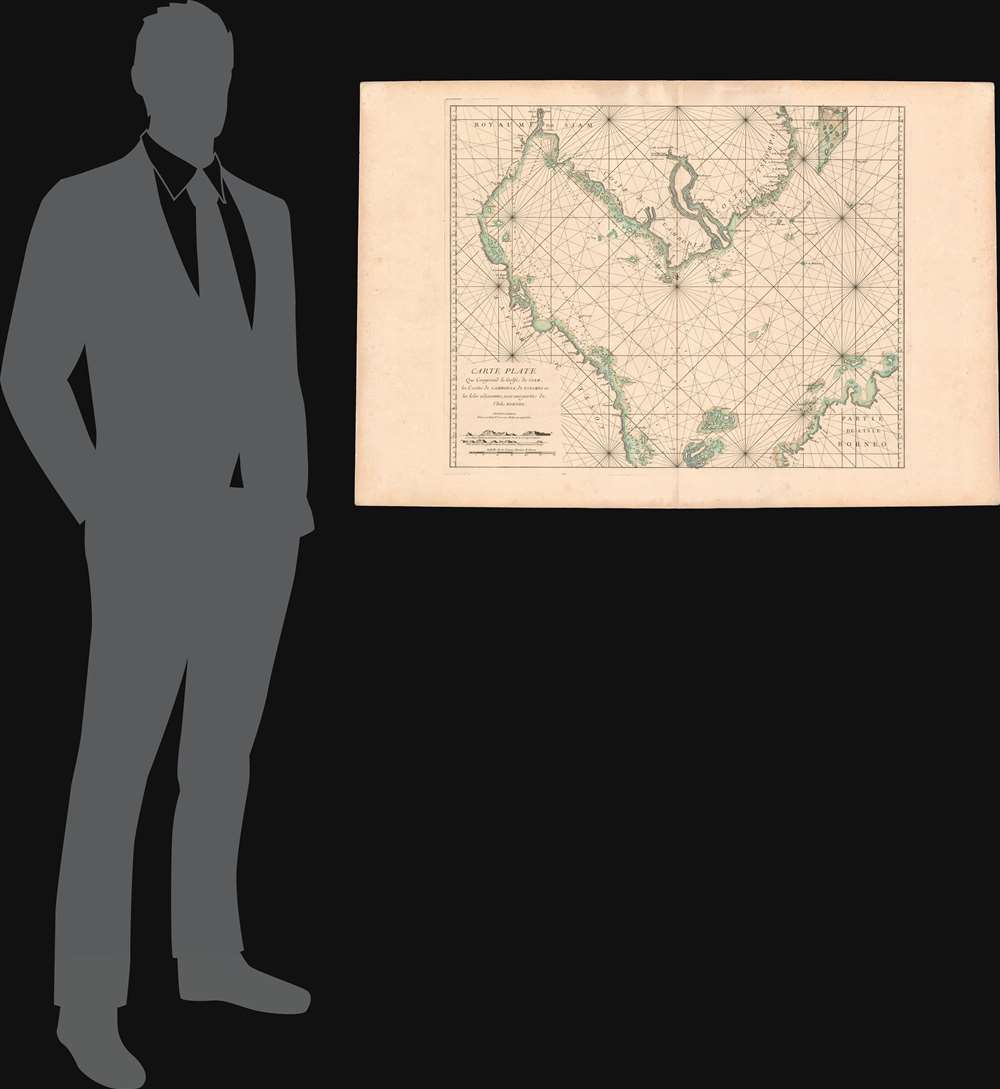 One of the first specific printed maps of the Gulf of Thailand and Cambodia.
$3,000.00

This is a rare 1745 d'Après de Mannevillette nautical chart or maritime map of the South China Sea and the Gulf of Thailand - one of the first specific printed maps of the Gulf of Thailand and Cambodia. Coverage extends from western Malaya just north of Singapore to the ancient Siamese (Thailand) capital at Ayutthaya, to the Paracel Islands just east of Vietnam, and south to northern Borneo. The map's focus is on the Mekong north to 'Ville de Cambodia', roughly modern-day Phenom Penh, and the surrounding seas.

Cartographically this map is attributed to the 'Anciennes Cartes', by which Mannevillette is referring most directly to John Thornton's (1641 - 1708) manuscript map of the same region drawn in 1701 - which this map follows in terms of scope, scale, and detail. There also appear to be multiple updates here, a signature quality of Mannevillette, who not only collected charts, but corrected and revised them from firsthand observations taken on his many voyages. The original Thornton manuscript is preserved at the Bibliothèque nationale de France, (CPL GE SH ARCH-29).

Thornton doubtless copied old Dutch charts compiled after the Japanese abandoned the Southeast Asia trade in 1635. One such V.O.C. manuscript appeared at Christies in 1999, and may well be the original source of both the Thornton and the present map. There we see for the first time the general outline of the coasts, the large island clusters east of Malaya representing the Riau Archipelago, and the primitive mapping of both the Mekong and the Chao Phraya as far as Ayutthaya (Siam) - note this same cartography appears on François Valentijn's (1666 - 1727) map of the Kingdom of Siam. The mapping of the Paracel Islands as a large, squared wedge in the upper right, as well as other details, was added in the Thornton manuscript.

Thornton's 1701 chart seems to have been copied from Dutch V.O.C. manuscript maps prepared in Batavia in the mid to late 17th century. These jealously guarded charts began to appear after 1635. Before 1635, the Japanese dominated trade with Cambodia and defended their trade route. In 1635, the Sakoku Edict (Sakoku-rei, 鎖国令) came into effect, creating the 'closed country' policy and ending all Japanese foreign trade. The Dutch operating from Batavia were quick to fill the trade vacuum in Cambodia. A legacy of the Japanese trade is preserved here. The Mekong, the primary Japanese trade artery with Phenom Penh (Ville de Cambodia), is identified as the R. Japanese. Also noted is the 17th century Dutch lodge near Phenom Penh, by this time long abandoned, and another fort near Bangkok, apparently active.

This map was published by Jean-Baptiste Nicolas Denis d'Après de Mannevillette in the scarce 1745 first edition of his important maritime atlas, Le Neptune Oriental. Most examples of the 1745 Le Neptune Oriental were destroyed by the French Admiralty, who considered the information contained within too dangerous. This map was not included in the relatively common 1775 second edition of Mannevillette's atlas, so today it is extremely rare. We note just two other examples, both grossly misdated and held at the Bibliothèque nationale de France, one in the Collection d'Anville (07110 B). No market history.

The French Admiralty considering that the Neptune Oriental was too dangerous for ... ordered the remaining copies to be destroyed. (#292, 1994, p. 341)

This accounts somewhat for the extreme scarcity of the first edition and all of the maps contained therein. We also note a supportive comment in a, 1763 catalog of maps and charts issued by the French chart and map dealer Roch-Joseph Julien (1745 - 1779). Mannevillette nonetheless continued to collect and revise nautical chart for the next 30 years, often working with the important English cartographer Alexander Dalrymple (1737 - 1808). In 1775, he issued greatly expanded and updated second edition of Le Neptune Oriental. This time with an additional 41 charts, making a total of 63 charts. This edition also proved popular and was widely disseminated. As noted by multiple cartobibliographers, there are variations between examples and no two seem to be identical, suggesting that many were compiled to order, often with additional maps that could be purchased but which were not in the standard collation. The second edition was published in Paris by Demonville and in Brest by Malassis. In 1781, one year after Mannevillette's, another work, Supplement au Neptune Oriental was issued, also by Demonville and Malassis.