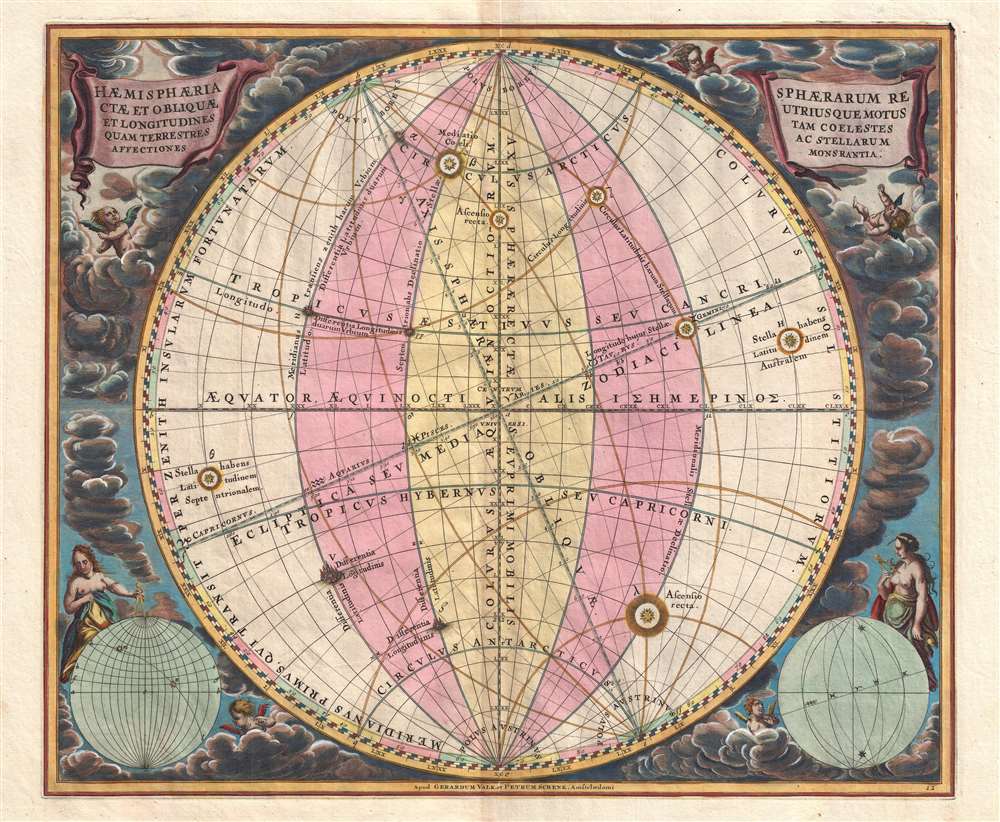 A fine 1708 Andreas Cellarius celestial chart illustrating the motions of the upright (the Equatorial Coordinate System) and oblique spheres (the Ecliptic Coordinate System), the Celestial and Terrestrial Longitudes, and the influence of the stars. The surround is lavishly decorated with finely engraved and colored images of clouds, putti, and two sub-diagrams. It is of note that this is a beautifully colored example with giltwork incorporated into the color.

Cellarius first issued this chart in 1660 in conjunction with map and atlas publisher Johannes Janssonius. The present example is from the 1708 Valk and Schenk edition of the Atlas Coelestis.

Andreas Cellarius (1596 - 1665) was a Dutch-German cartographer, mathematician, and astronomer. He was born in Neuhausen (now a part of Worms), and was educated in Heidelberg. Cellarius, being Protestant, may have left Heidelberg in 1618, at the onset of the Thirty Years' War, or slightly later, in 1622, when the city fell to Catholics. His activities are unclear at this time but based on his later works it is conjectured he spent time in Poland where he may have taken work as a military engineer. In 1625. he married Catharina Eltemans in Amsterdam, where he taught Latin. After a brief stay in The Hague, the family moved to Hoorn. From 1637 until his death he was rector of the Hoorn Latin School. Today Cellarius is best known for his Harmonia Macrocosmica of 1660, a major celestial atlas, published in Amsterdam by Johannes Janssonius. Learn More...