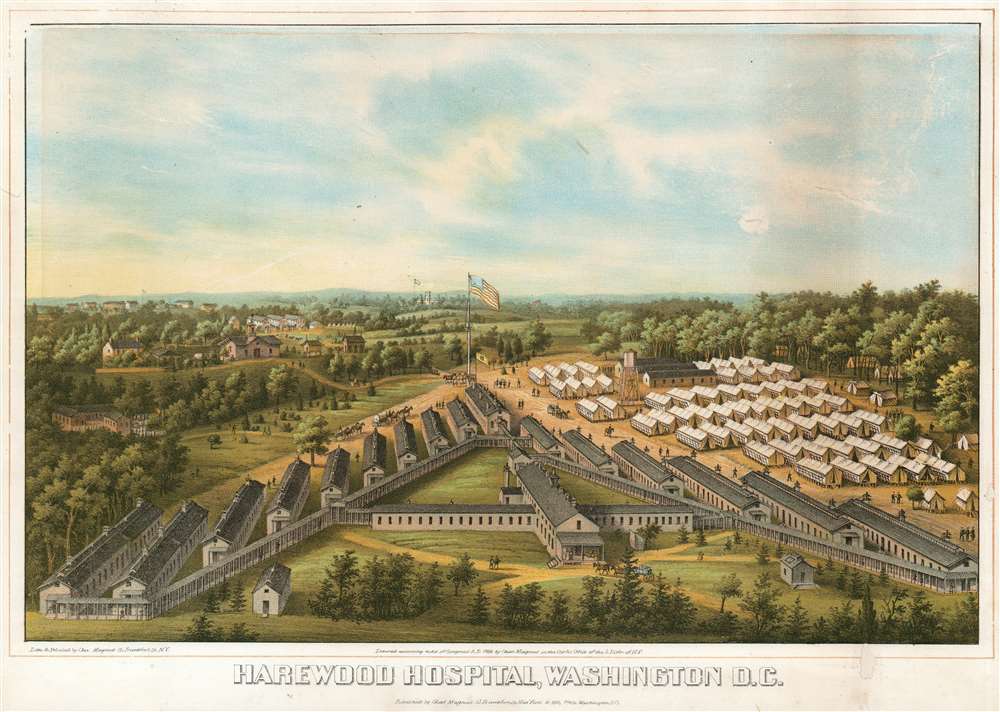 Union hospital during the Civil War.

This is an 1864 bird's eye view of Harewood General Hospital by Charles Magnus. Harewood General Hospital was a pavilion-style hospital operated by the United States during the American Civil War to render care for Union personnel, which was in operation from September 4, 1862, to May 5, 1866. The view shows the V-shaped layout of the Hospital's barracks-like wards, as well as an array of orderly tents extending across fields and into the neighboring woods. (The site of the hospital can be found east of Georgia Avenue NW north of the Glenwood Cemetery and south of the Armed Forces Retirement Home. Washington Hospital Center, the Washington DC VA Medical Center and the Children's National Medical Center can be found there now.)

Harewood Hospital was part of the rapid expansion of Union military medicine developed to meet the unprecedented need for medical services resulting from the horrific casualties that characterized the American Civil War. The United States peacetime army had only 113 doctors on staff, nearly a quarter of which joined the secessionists. By the end of the war, the Union Army had more than twelve thousand doctors. Before the war, the only hospital in Washington, DC, was a two-story six-room building. The July 1861 was a small affair compared with the war's eventual bloodbaths, but even that outstripped the medical systems in place. The military had no ambulance corps, and the civilian ambulance drivers fled with the battle's first shots. Abandoned ambulances were commandeered by healthy soldiers fleeing back to Washington, DC. Wounded soldiers, on the other hand, lay on the battlefield for days. By the battle of Antietam - weeks after Harewood was established - the Union had developed a network of 71 field hospitals, channeling wounded to larger general hospitals, like Harewood. These were situated in large cities, and soldiers were transported there from the field hospitals by train or ship. At the end of the war, there were about 400 hospitals with about 400,000 beds. Harewood alone had nine wards of 63 beds each totaling 945 beds, with as many as 312 additional tents added to expand capacity to 1,872 beds.

The situation of Harewood in the capital made it easily accessible to visiting notables, among whom were President Abraham Lincoln, Mary Todd Lincoln, and Walt Whitman.

During the War, Charles Magnus printed views of many of the Union hospitals and camps both in the form of letterhead writing paper and envelopes and also as separately issued prints such as this. These were very often the only visual records families would have of the places where their loved ones in the military were stationed, but while they were popular they survive poorly, seldom enjoying archival treatment. Consequently, this view is rare. We see only four examples catalogued in OCLC, at the American Antiquarian Society Library, the Boston Athenaeum, The University of California at Davis, and the Clements Library at the University of Michigan.