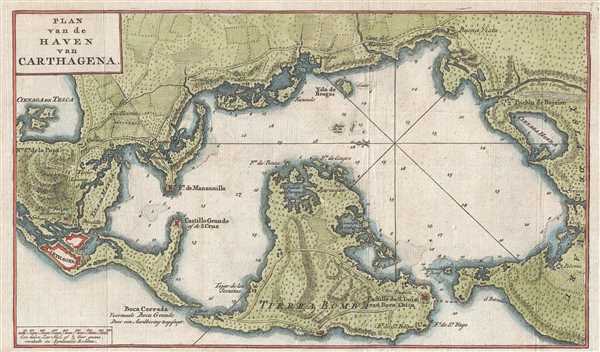 Indicates the numerous castles and smaller forts constructed to protect Cartagena from attack.

This is a 1765 Isaak Tirion map of Cartagena Harbor, Colombia. Oriented toward the east, the map depicts the region from Cartagena to Polonia and from the northern shore of Cartagena Bay to the Isla de Tierra Bomba. Numerous locations around the bay are labeled, including various settlements around the bay, islands, and forts and castles for defense of the colony. Several forts are located on the Isla de Tierra Bomba, including the Castillo de San Luis van Boca Chica (Castillo de San Luis de Bocachica), which was constructed to guard the entrance to the Bocachica Channel and protect Cartagena. The Fort de Manzanillo, the Castillo Grande of de S. Cruz, and the Fort de San Felipe de Baraxas are among the other castles, forts, and strongholds labeled.

Cartagena (Carthagena) itself is situated on the lower left and is illustrated surrounded by city walls. Per Kip S. Kapp

In the days of discovery and colonisation, the most heavily fortified port inthe New World was Cartagena. This historic city was used as a haven for the galleons laden with the riches of the Andes bound for Spain. Each year, Cartagena de Indias played host to the Plate Fleet and stubbornly defied the haunting pirates that plagued the coast. Skilled artisans were brought over from Sevilla to layout towns and design churches and homes of distinction; in consequence, some of the finest examples of colonial architecture are still to be found amid the narrow streets of this old, walled city. Cartagena was under constant threat from the pirates and privateers who roamed the Caribbean in past centuries and, for protection, elaborate fortresses were built to line the harbour and its approaches. (Kapp, K.S., The Early Maps of Colombia up to 1850, The Map Collectors' Circle, no. 77, 1971)

Numerous features of the land surrounding the bay are illustrated including trees, that appear to be plantations, and tree-lined fields, which most likely indicates private ownership of the fields. Roads crisscross the landscape and, as stated above, numerous small villages appear along the roads and at intersections. Depth soundings are included throughout the bay.