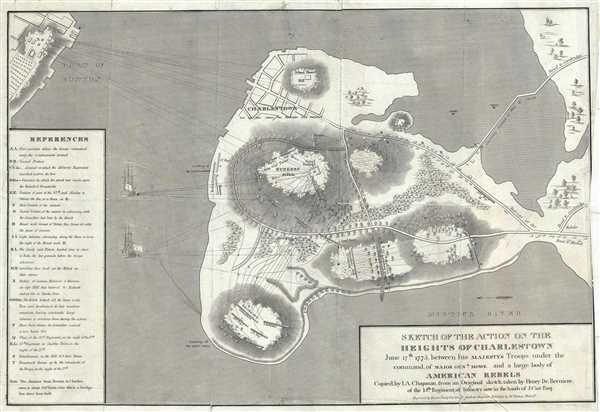 This is an important 1818 map of the Battle of Bunker Hill, Charlestown, Massachusetts, by I. A. Charles. Copied from the original manuscript sketch by Henry De Berniere, which was apparently discovered in a trunk, it depicts the American Revolutionary War Battle plan of the fight at Bunker Hill and surrounding areas. It shows part of Charlestown and part of Boston, and includes roads, buildings and the positions of American and British forces. It also notes the British batteries in Boston.

Fought on June 17, 1775, the Battle of Bunker Hill was fought during the early days of the American Revolutionary War. When colonial troops learned of the British’s plans to occupy the hills surrounding Boston in order to gain control of the Harbor, they occupied Bunker Hill and Breed’s Hill in preparation of the attack. After two unsuccessful attacks by the British, the British finally succeeded in gaining control of the peninsula. Although the battle was a victory for the British, it resulted in heavy losses for the British, thus discouraging them from any further sorties against the siege lines, and building confidence in the relatively inexperienced colonial troops to stand up to a regular army.

A reference key is included along the left border. This map copied by A. Chapman and engraved by Kneass. Young and Co. for the 1812 issue of the Analectic Magazine, pas published by M. Thomas. One of the few obtainable battle plans of the Battle of Bunker Hill.

Henry de Berniere (17?? - 1800) was an ensign and spy in the British Army’s 14th Regiment. Under the command of British General Gage, Captain William Brown and Berniere would disguise themselves as farmers or workers in civilian clothes and venture into the countryside and towns to spy on American battle preparations. Berniere, an artist, would sketch details of the area, and Brown was the logistics expert. They were responsible for helping British troops attack Concord in April 1775. Learn More...


The Analectic Magazine (1813-1820), was published by Moses Thomas in Philadelphia. The July 1819 issue of the magazine featured the first lithograph ever made in America, depicting a woodland scene by Bass Otis. Famous American author, essayist and historian served at editor of the magazine from 1813- 1814. He also reprinted Francis Scott Key’s poem ‘ Defense of Fort McHenry’ in November 1814 edition of the Analectic Magazine, later immortalized as the United States national anthem ‘The Star-Spangled Banner’. Learn More...