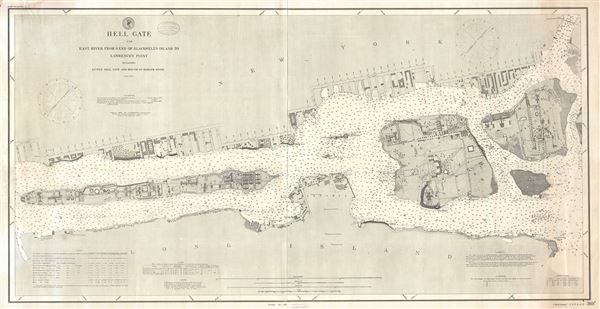 The only known example in this edition.

An extremely scarce and important 1891 nautical chart or maritime map depicting New York City's Hell Gate, the East River, the Harlem River, Roosevelt Island (Blackwell's Island), Ward's Island, and Randall's Island, as well as portions of adjacent Manhattan, Brooklyn, and Queens. As suggested by the title, the map focuses on the East River from the southern tip of Roosevelt Island northwards to the northern tip of Randall's Island and the Harlem River. The three islands are particularly well mapped with superb inland detail with individual buildings and roadways identified. The Queens and Manhattan portions of the map are detailed only along the riverside.

The real focus of the map is the river itself. The passage between Roosevelt Island and Ward Island was first named Helegat, meaning 'bright passage', by the Dutch Explorer Adriaen Block in 1614. When the English moved in it was Anglicized to Hell Gate, arguably a more appropriate term since the shoals and the violent swirling tidal flux proved the demise of many ships. To sailors the gate appeared as 'a giant whirlpool, punctuated with rocks, reefs, and islands. To a sea captain worth his salt, it must have appeared as a gate to Hell' (The Conquest of Hell's Gate, U.S. Army). Countless ships were lost here inspiring the Army Corps of Engineers to undertake the incredible project of deepening the channel and blowing up the reefs. In 1885 the Great Blast of Flood Rock, the largest manmade explosion before the Atomic Bomb, destroyed Flood Rock (still depicted here). The debris from the explosion was subsequently cleared out and used to fill the narrow channel between Randall's Island and Ward's Island, as well as the 'sunken garden', creating a single large island. Subsequently, this important channel became easily navigable and trade consequently increased dramatically.

Though the U.S. Coast Survey issued this map well after demolition crews blew up the reefs and shoals near Ward's Island as well as Flood Rock, most of these reefs are still shown, suggesting that it may have been nearly useless to a navigator. This may well explain its extraordinary scarcity. Only two other examples are known, both of a later date, and both held in institutional collections. These include one example (G3802.H4 P531895.U5) dated 1895 at the University of Illinois at Urbana-Champaign Library, and another example (G3804 .N4 P5 1892 .U4) dated 1892 at Stanford University. It also does not appear in Haskell.

According to the maps' imprint it was first published in 1887, the present example being updated to April of 1891 under the supervision of Thomas Corwin Mendenhall, superintendent of the U.S. Coast and Geodetic Survey. The triangulation was completed by E. Blunt and G. Bradford. The topography is the work of H. Hergesheimer. The hydrography was accomplished by J. M. Hawley and C. P. Perkins. Most of this work was completed between 1885 and 1886. Although earlier examples may theoretically exist, the above is the earliest known surviving example and the only such in private hands. Represents coast chart no. 3695.