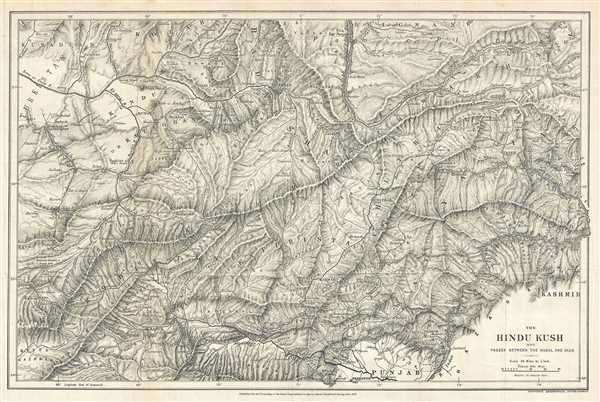 One of the first accurate maps of the Hindu Kush Mountains in Afghanistan.

This is a rare 1879 Sir Clements Robert Stanford map of Afghanistan and Pakistan. The map present parts of both Afghanistan and Pakistan, but is centered around the Hindu Kush Mountains and their watershed. The map depicts myriad rivers in the region, including the Kabul, Helmand, Indus, and Oxus, all of which flow out of the Hindu Kush. A range of high mountains, the Hindu Kush extend around 500 miles from the Pamir Mountains near the Pakistan-China border into western Afghanistan. The range forms the divide between the Amu Darya (Oxus) and the Indus river systems. Kabul, Jalalabad, and several other cities are depicted on the map. The map also labels the regions of Punjab and Kashmir, as well as the Pamir Plateau.