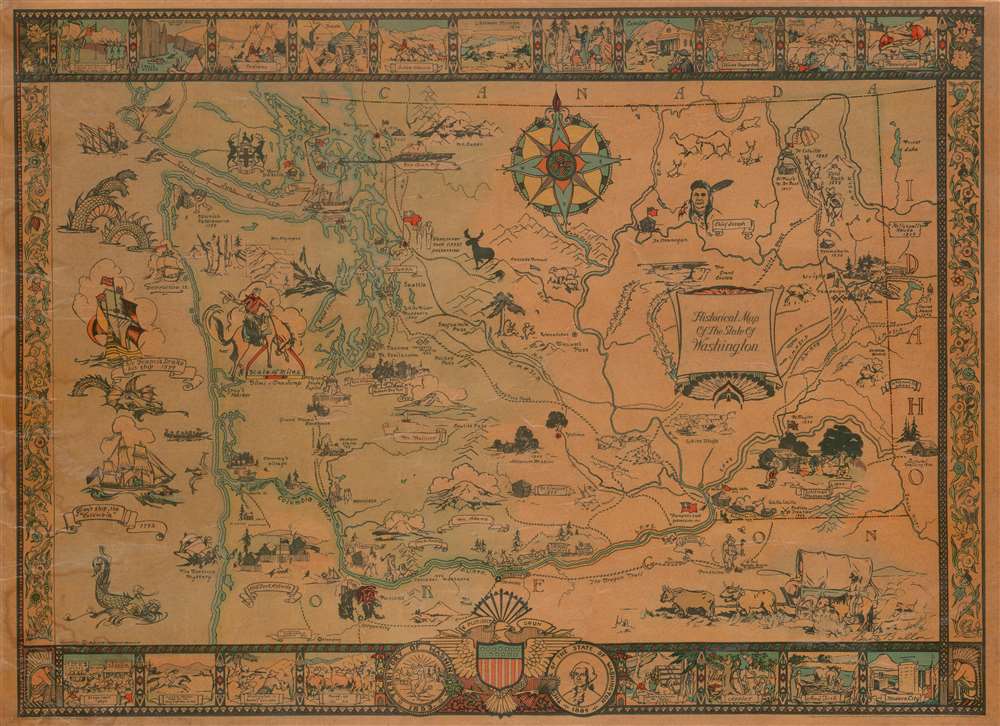 A wonderful pictorial map of Washington State created by a celebrated woman artist.

This is a 1931 Bertha Ballou pictorial map of Washington State tracing historical events around the state. The map depicts the region from the Pacific Ocean to Idaho and from Canada to Oregon and includes views of several of Washington's well-known mountain peaks, including Mt. Saint Helens and Mt. Rainier. Beginning with the arrival of Sir Francis Drake in 1579, Ballou identifies key events in the history of the region, such as the 1855 gold rush, the arrival of Vancouver, and battles all across the state. One such event, the 1847 Whitman massacre, is illustrated by a vignette in the lower right quadrant. The Whitman massacre, as it has become known, was the murder of missionaries Marcus Whitman, his wife Narcissa, and eleven others by Cayuse Indians, and is one of the most notorious episodes in the history of the American settlement of the Pacific Northwest. The incident sparked the Cayuse War, which raged until 1855.

Historical forts are illustrated in profile, including Fort Nisqually which was a Hudson's Bay Company post, Fort Astoria (in Oregon), and Fort Walla Walla, all of which are labeled and the date they were established given. Seattle, Tacoma, Spokane, and Olympia are labeled, with Olympia marked by a vignette of the State Capital. The rail lines of the Northern Pacific Railroad; Chicago, Milwaukee, St. Paul, and Pacific Railroad; the Oregon Railroad and Navigation Company; and the Spokane, Portland, and Seattle Railway are illustrated and identified. Other vignettes include an illustration of a covered wagon being pulled by a team of oxen, a cowboy riding a bronco, and the Grand Coulee. The whole is surrounded by a pictorial border consisting of views of historical events along with common sights around Washington.

Julia Bertha Ballou (1891 - January 4, 1978) was an American landscape, portrait, and western-scene painter active during the 20th century. Born in Hornby, New York, Ballou was the daughter of Cora Hendrick Ballou and Colonel Charles Clarendon Ballou, who, during Bertha's childhood, held posts at frontier forts. Colonel Ballou was the commander of Fort Niobrara in northwest Nebraska near the town of Valentine in the early 1900s, making this the setting for Bertha's late childhood and early adolescence. By this time she had already developed a keen interest in art and a talent for it. She took full advantage of her surroundings, sketching landscapes around the Sandhills, the Niobrara River Valley, and scenes of U.S. soldiers and Indians, often on horseback. In 1908 Ballou enrolled at Randolph-Macon Woman's College, where she spent two years studying art. Before enrolling at the Art Students League in New York City for the 1911-1912 term, she traveled in Asia. She studied at the Corcoran School of Art in Washington, D.C. from 1916 - 1920 before moving out to Spokane, Washington to live with her family, before enrolling as a student at the Museum of Fine Arts in Boston from 1921 until 1924. She studied in France and Italy from 1925 until 1927 and her studies were paid for by a Tiffany Foundation Fellowship. Returning to the United States in 1927, she returned to Spokane and lived with her parents. Her father died in 1928. Ballou was a member of the faculty at Holy Names College and Gonzaga University and was a popular lecturer along the West Coast, giving talks about her career as a portrait painter and her time in Europe between the World Wars. Ball was a member of the Spokane Art Association and the Washington Art Association. She married Frank D. Buckler on June 30, 1930, but the marriage ended in divorce. She lived the rest of her life with her sister Alice. Learn More...


The American Association of University Women (AAUW) (1881 - present) is an American non-profit organization that advocates for equality for women and girls through advocacy, education, and research. Founded in 1881 in Boston by Marion Talbot and Ellen Swallow Richards, that AAUW now has over 170,000 members and supporters, 1,000 branches, and 800 college and university partners. Originally known as the Association of Collegiate Alumnae, the AAUW has participated in many campaigns advocating for women. In 1887, a fellowship was created to support women's education. The organization donated money to the campaign to purchase a gram of radium for Marie Curie in 1919. During World War II, the AAUW worked to support displaced female scholars and began raising money on their behalf. Today, the AAUW sponsors many different programs and still supports women's education through scholarships, grants, fellowships, and other awards. They also support research, STEM education, and leadership initiatives. Learn More...

Good. Varnished and mounted on linen. Blank on verso.