1857 Colton Map of Holland and Belgium 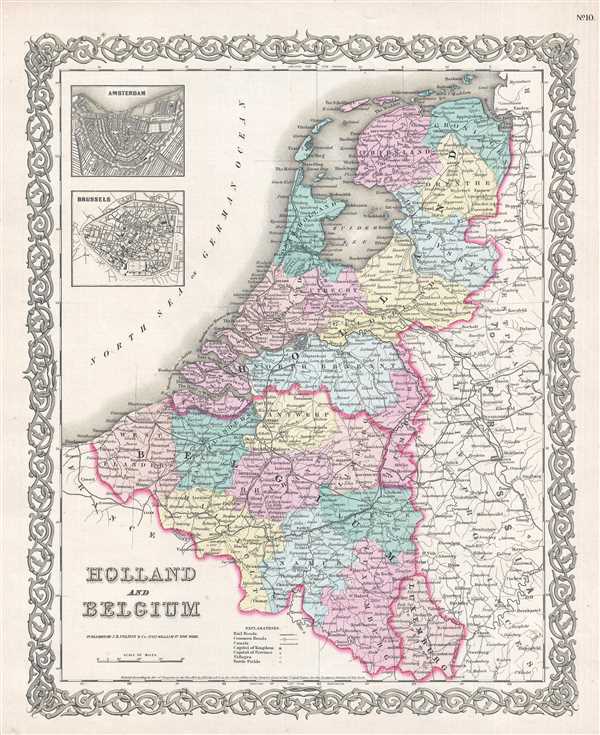 1857 Colton Map of Holland and Belgium

This is an 1857 J.H. Colton map of Holland and Belgium. Like most of Colton's Europe maps, this map was derived from an earlier wall map of the World produced by Colton and D. Griffing Johnson. The map depicts both Holland and Belgium from the North Sea to Germany and from the North Sea to Luxemburg. Inset city plans in the upper left quadrant detail Amsterdam and Brussels. Numerous cities, towns, and villages are identified, including Rotterdam, Utrecht, Amsterdam, Brussels, Ghent, Liege, and Bruges. Myriad rivers, roads, railroads, canals, and other features are illustrated. Provinces in both Holland and Belgium are shaded different colors for easy differentiationThe whole is surrounded by Colton's typical spiral motif border.

In 1830, the Belgian Revolution led to the secession of Belgium from the United Kingdom of Netherlands and its subsequent consolidation as the independent Kingdom of Belgium. Though Belgium had successfully attained self-rule, the Netherlands refused to recognize the new country until the 1839 Treaty of London.

Dated and copyrighted to J. H. Colton, 1855. Published from Colton's 172 William Street Office in New York City, this map was issued as plate no. 10 in volume 2 of Colton's 1857 Atlas of the World.