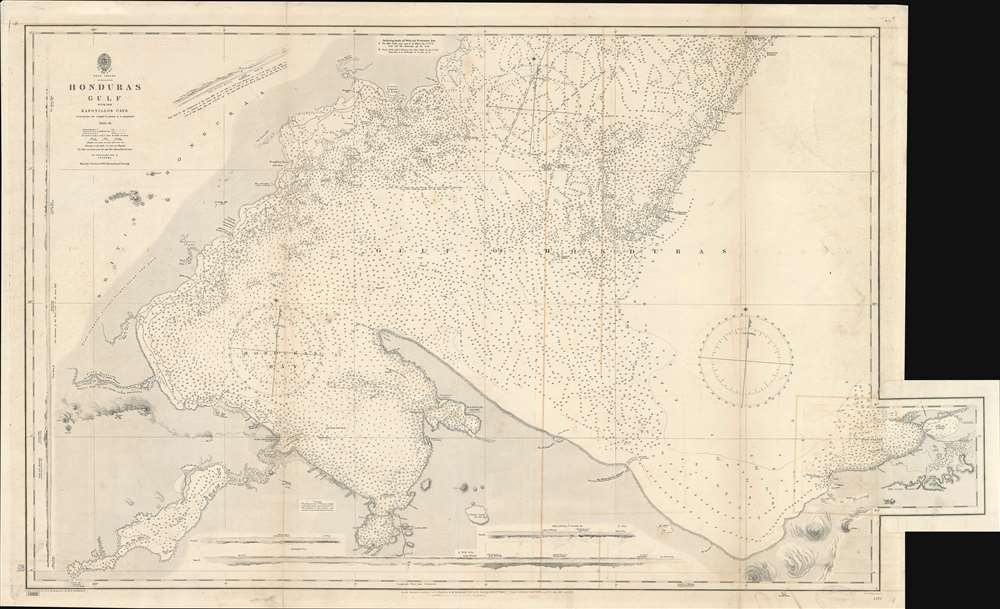 Depicts the Central American coastline from Amatique Bay to the Bahia de Omoa and part of the Northern Railroad to Guatemala City.
$600.00

This is an 1899 British Admiralty nautical chart or maritime map of the Gulf of Honduras. The map depicts the Central American coastline from Belize (British Honduras) to the Bahia de Omoa on the coast of Honduras including Amatique Bay and Livingston, Guatemala. Myriad depth soundings are indicated throughout, and coastal islands, shoals, banks, and other maritime hazards are identified. River Sarstoon, which marks the border between British Honduras and Guatemala, is illustrated and labeled, as is El Golfete, but no significant inland detail is present. Some coastal sites, such as points, hills, and settlements, including Port Livingstone and Puerto Barrios, are nonetheless noted. Five views are illustrated along the borders, each of which is labeled alphabetically. Curiously, these views are oriented as they would have been seen from certain points on the map, which are labeled with corresponding letters, instead of oriented toward the bottom of the map, as was customary.

The Northern Railroad of Guatemala

The Northern Railroad of Guatemala was a railroad that connected Puerto Barrios on the Caribbean coast with Guatemala City. First proposed in in 1883 by then President General Justo Rufino Barrios, the project never progressed and was forgotten following the death of Barrios at the Battle of Chalchuapa in 1885. José Maria Reyna Barrios resurrected the railroad project after he assumed power in 1892. He declared the construction of a city on the Caribbean, which he named Puerto Barrios, by executive order, and used yet another executive order to declare Puerto Barrios the 'Major port of the Republic' and shifted all customs duties there from Livingston. Barrios also brought the eyes of the world to Guatemala by declaring that his country would hold an Exposición Centroamericana in 1897 to celebrate the completion of an interoceanic railway connecting Puerto Barrios with the Port of Iztapa on Guatemala's Pacific coast. Unfortunately for Barrios, his plans, and the falling prices of coffee and silver, bankrupted the Guatemalan government and led to his assassination on February 8, 1898. The new president, Manuel Estrada Cabrera, faced crippling government debt to British banks, which forced him into an uneasy alliance the United States. He eventually contracted the Central American Improvement Co. Inc., to finish the railroad and refurbish sections that had fallen into disrepair. In exchange, the Guatemalan government granted the American company a concession to use the railroad for free. In 1904, the concession was transferred to the International Railways of Central America, which was owned by the United Fruit Company. Eventually, United Fruit controlled all of Puerto Barrios, including the banana plantations in Izabal (which they reached by railroad) and the merchant ships that carried the cargo from the docks they also operated. Eventually, a highway was constructed parallel to the railroad, leading to the closure and insolvency of the railroad.

This chart was originally surveyed for the British Admiralty by Commanders R. Owen and E. Barnett from 1835 through 1841. It went through several subsequent corrections, as is common with nautical charts, with this example was published in 1899.

Average. Exhibits severe offsetting and some soiling. Wear along original fold lines. Blank on verso.
Looking for a high-resolution scan of this?