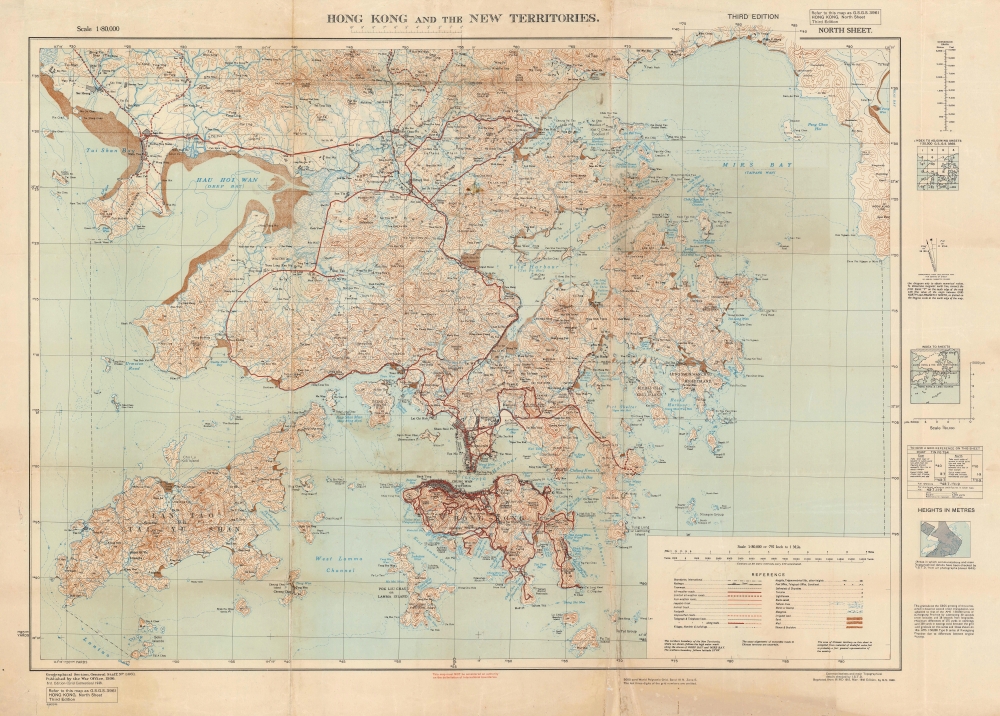 This is a 1949 British War Office map of Hong Kong, Kowloon, and the New Territories. The map depicts the region from China to Po Toi Island and from Tai Shan Bay and Lan Tao to the Dapeng Peninsula and Bias Bay. Towns, and villages are labeled, and Victoria and Kowloon City are illustrated in detail, down to individual streets and buildings. All weather roads stand out even more from the topographic background covering the entire map, making what is presumably the most accessible road network the first element registered by a viewer. Various other grades of road are also illustrated here, each of which are indicated by a different notation. Smaller islands throughout the region are labeled, along with bays, rivers, harbors, and hills. A legend is situated in the lower right corner.

After the announcement of Japan's unconditional surrender on August 15, 1945, it took nearly two weeks for a British occupation force to reclaim their lost colony. It would not be long before the Chinese Nationalists (Kuomintang) and the Chinese Communists began fighting a ruthless civil war that lasted until 1949. 1949, as it turns out, was also a critical year in the history of British hegemony in Hong Kong, as the British government finally made the definitive decision to defend Hong Kong instead of abandoning it to the victorious Chinese Communist Party. The British believed that by taking a stand in defense of the Colony, their firm position may serve as a deterrent against Chinese Communist aggression against the colony, that it may bring uncertain parts of the local population to the British side and reduce the possibility of internal security threats, and that holding Hong Kong would strengthen the anti-Communist position in Southeast Asia. Although the true commitment of the British to holding Hong Kong, it is true that Hong Kong was reinforced to a garrisoned troop strength to 30,000 soldiers, plus tanks, land-based fighter aircraft, and a large naval presence, including an aircraft carrier. Communist forces did mass along the border with the New Territories in October 1949, but never moved further, and eventually withdrew.

This map was produced and published by the War Office in 1949. It is the 3rd edition. Per the OCLC, this map is part of six institutional collections. It is scarce on the private market.