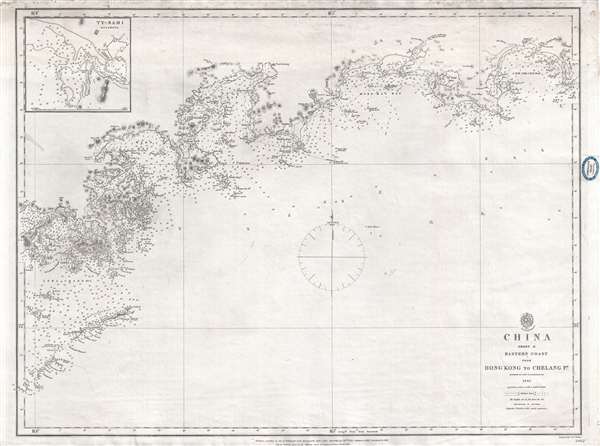 Important nautical chart of the waters around Hong Kong issued shortly after the acquisition of Kowloon.
$3,000.00

An extremely rare 1861 British Admiralty nautical chart or maritime map covering the coast of China from Hong Kong (香港) to Chelang Point (near Jieshi Bay) by Sir Richard Collinson. Issued shortly after the acquisition of Kowloon, which is labeled, this map includes excellent coverage of the New Territories, although they were not then known as such, from Lan Tao (大嶼山) to Mirs Bay. The urban center of Hong Kong, today called Central, is here identified as Victoria. The map includes an inset of Shànwěi (汕尾), or Swabue, or Ty-Sami, in the upper left corner.

Following the acquisition of Hong Kong at the end of the First Opium War (1839 – 1842), the British recognized the demand for detailed surveys of the China Coast. They turned to Richard Collinson, a Royal Navy officer who had distinguished himself in the War. Collinson completed detailed surveys of the China coast in the vicinity of Hong Kong between 1842 and 1846. This map, the result of those surveys, was completed in 1845, but not published until 1849. The map went through several editions until the 1880s, the present example corresponds to the 3rd edition with updates to 1852 and corrections to 1861. It is noteworthy that the 1861 update follows closely on the 1860 acquisition of Kowloon, which is probably behind the update in that year.

This map was printed by J. and C. Walker for the British Admiralty Hydrographic Office as chart number 1962. The original seller for this chart appears to have been J. D. Potter, of King Street, Tower Hill, London. It subsequently found its way to Melbourne, Australia, where it was sold by Blundell and Ford, Agents for the sale of Admiralty Charts. All examples of this chart in all editions are extremely rare. We have identified no other examples of the 1861 edition. Two examples of the 1852 are known, one at Brown University, and another in the National Maritime Museum, Greenwich, England.

Richard Collinson (November 7, 1811 – September 13, 1883) was an English naval officer, marine surveyor, and Arctic explorer. He was born in Gateshead, Tyne and Wear, England, then part of Durham. He joined the Royal Navy in 1823, at age twelve, and rose in the ranks, becoming a lieutenant in 1835, commander in 1841, and captain in 1842. Collinson was a highly capable captain. He participated with distinction in the First Opium War (1839 - 1842). After the war, along with Commander Henry Kellett, he completed a series of pioneering surveys of the China coast from the Yangtze River to Hong Kong. These he completed between 1842 and 1846 while serving as commander of the HMS Plover. In 1850, he was sent north in command of the HMS Enterprise to search for survivors of the Sir John Franklin expedition. Although he came quite close, he never found Franklin's lost men and returned to England without success. Nonetheless, he was honored by the Royal Geographical Society for his surveys in the Arctic and proof that it was navigable from the Behring Strait to King William's Land. Collinson was Knighted in 1875, the same year in which he retired from active duty with the rand of Admiral. Collinson died in September of 1883.