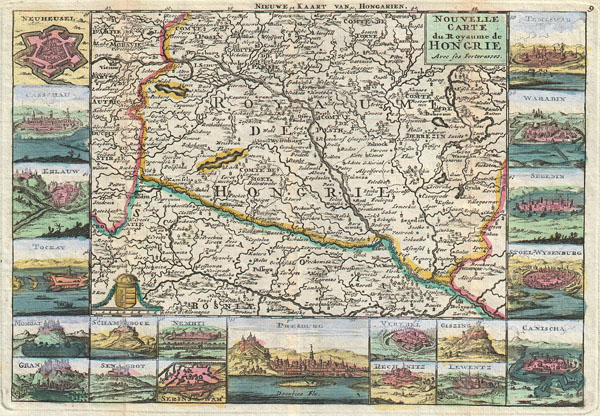 A stunning map of Hungary first drawn by Daniel de la Feuille in 1706. Covers from Moravia in the northwest south to Bosnia and east as far as Belgrade. Surrounded by twenty maps and views of important villages and fortresses in this region. From top right in a clockwise fashion these include Temeswar, Waradin, Segedin, Stoel-Wysenburg, Canischa, Giszing, Lewentz, Rechnitz, Vererel, Presburg, Nembti, Serinswar, Sengrot, Schambock, Gran, Mongat, Tockay, Erlauw, Casschau and Neuheusel. French language title in the upper right hand quadrant. Alternate Dutch language title along the upper border. This is Paul de la Feuille's 1747 reissue of his father Daniel's 1706 map. Prepared for issue as plate no. 9 in J. Ratelband's 1747 Geographisch-Toneel.