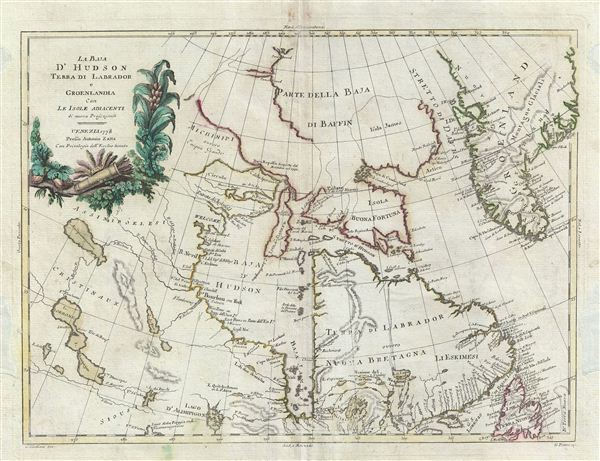 This map is a hand colored 1778 A. Zatta map of the Hudson Bay. Centered on the Hudson Bay, it covers from Baffin Bay (North Atlantic Ocean) to James Bay. Includes the Hudson Bay, southern Greenland, Labrador and Newfoundland. The map offers excellent detail throughout especially regarding the topography of Greenland and the waterways extending westward form the Hudson Bay. During the late 18th century most had given up all hope of finding a water route through the Arctic to the Pacific, however, hope remained that a river passage was possible. The network of lakes and rivers extending westward from the Hudson Bay and the Great Lakes was the best hope for such a route. Here Zatta connects Lake Winnepeg (Ouinipigon) via a series of rivers and lakes to the Hudson Bay. He also leave a number of entradas, including the entrada di Chesterfield and Michinipi, open at the west. This map was issued as part of A. Zatta's 1776 publication of Storia Dell' America Settentrionale Del Signor Abate Raynal Continuata fino al present, con Carte Geografiche rappresentanti il Teatro della Guerra Civile tra la Gran Bretagna, e le Colonie Unite.