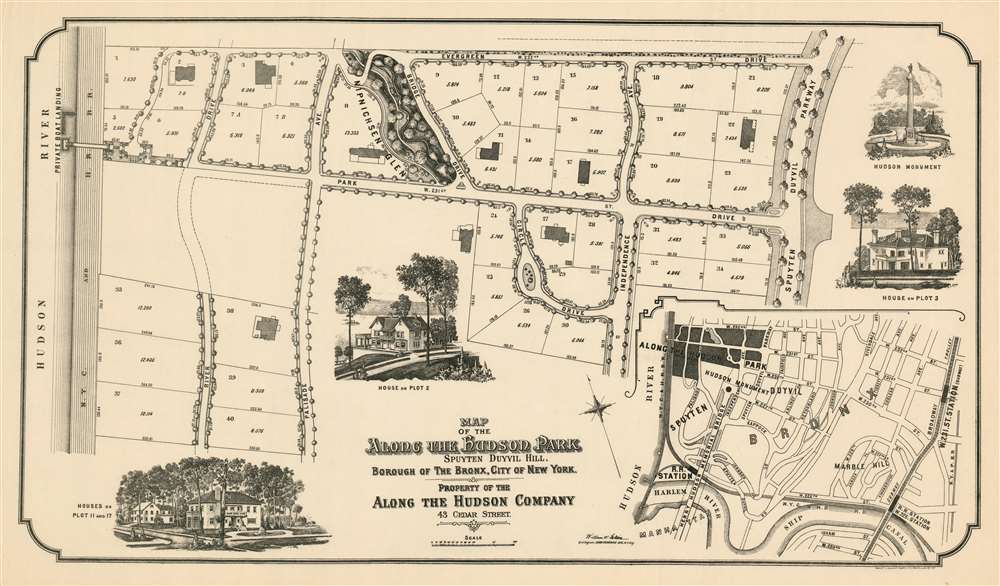 This is a separately issued 1909 broadsheet map of the northern part of New York City's Spuyten Duyvil neighborhood, promoted here as 'Along the Hudson Park.' The development extends from about W. 227th up to W. 232nd, and from the Spuyten Duyvil Parkway (now the Henry Hudson) to the Hudson River. This neighborhood had long been - and largely remains - an enclave of residences that were picturesque and oddly remote despite being situated within the city limits. At the beginning of the 20th century urban life steadily encroached on these pockets of pastoral living. As early as 1901, local citizens led by attorney John Jay McKelvey began protesting the overflow into their neighborhoods of tuberculosis patients wandering off from nearby Seton Hospital. Thereafer, McKelvey litigated and legislated against what what he referred to as The City Ugly (in a mordant reference to the 'City Beautiful' movement.) The 'Along the Hudson Company' was one such effort: the company bough properly protectively - often backed by other owners - selling it to those thought to be congenial neighbors, and limiting strictly the use of those lots in the terms of sale. If at least 15,000 square feet, the lot could have a stable, but otherwise construction on these lots were restricted to single-family homes. The neighborhood was advertised in Country Life magazine in 1910:

If you are a person of character and responsibility, with tastes which center about your home and family, and if you have felt the narrowness of City life, then we will gladly show you Something Different. Along-the-Hudson Park on Spuyten Duyvil Hill. A Bit of the Adirondacks Set Within the City Gates and Permanently Restricted. It costs from $20,000 to $40,000 to be a dweller in Along-the-Hudson-Park, but is work it.

Playground for an Innovative Architect

Many, if not most of the lots had by 1909 not yet been developed, and the sale of the lot generally included the construction of a house on the property. These houses were virtually all produced to the designs of the architect Robert W. Gardner, and views of some of these houses are depicted on the map, keyed to their specific lots. Gardner was an innovator in the use of reinforced concrete in residential architecture, and while he is best known for the large garden apartment buildings in Spuyten Duyvil he designed for McKelvey in the 1920s (most notably the Villa Rosa Bonheur (1924) and Villa Charlotte Bronte (1926), his partnership with McKelvey went back at least as far as 1909. The buildings shown on severl of the properties here - plot 11, plot 17 and plot 3, as a minimum - still stand today (some of the others may as well, but the neighborhood remains sufficiently exclusive that the Google Maps cars are disallowed free reign further west than Palisade Avenue as appears on the map.)

The construction of the house on Plot 11 shown on the map did not go smoothly, and led to lawsuits between the buyer - Charles H. Ayers - and the Along the Hudson Company. Happily for posterity, the litigation made its way to the New York Supreme Court in 1915. An example of the present map was entered into evidence as part of the September 20 1909 contract of sale, so we know that the map predates that at least and we are confident in dating the map at 1909. It does mean that the majority of the architectural views - including that of the Hudson Monument - are prospective views, as most of the buildings depicted (including the ill-starred lot 11) had not yet begun construction.

The broadsheet was issued no later than 1909, and does not appear have any further printings. We have seen only one other example on the market, and OCLC lists no examples in any institutional collection.

Robert A. Welcke (fl. 1876 – c. 1940) was a photolithographer active in New York in the latter part of the 19th century and early 20th century. Welcke was a Prussian immigrant, who emigrated to New York City from Wronki, Province of Posen, Prussia, in the 1870s. After he arrived, Welcke went into business with his brother, Edward Welcke, in New York City, who had arrived a decade earlier. After a split between the brothers during an economic depression in the late 1870s, Robert Welcke elected to continue in business on his own. Welcke's firm, Robert A. Welcke Offset Company, was based at 176 William Street. Welcke's corpus of work ranges from maps of New York and Connecticut to illustrations on Flemish Renaissance interiors to government maps and brochures to decorative sheet music covers. Following Welcke's death the firm was taken over by his daughter, Olga Welcke, who alongside William Jugens managed the firm until the outbreak of World War II. Learn More...


William W. Klein (February 9, 1868 - ?) was a German - American civil engineer and surveyor living and working in The Bronx. He was born in Mündelheim, Germany; he joined the cadet corps at 13, was a sergeant by 1887 and rose to the position of Lieutenant in 1890 - though he apppears to have at least visited New York as early as 1889. In any case, he was granted leave in 1897 (Verabschiedet) returning to the United States in 1897 at the age of 29. Klein appears to have begun work as a surveyor and civil engineer right away, working for some years in conjunction with printer Robert Welcke on several maps of the Bronx and New York City overall. In 1906 he was appointed City Surveyor. As of 1913 he was a listed member of the Verband Deutscher Schriftsteller in Amerika (Association of German Writers in America.) The beginning of the first world war saw him return to Germany to take up his commission. He served in the ersatz corps in 1914, being promoted to Oberleutnant. He appears to have survived the war: but we see no evidence of his ever returning to America or his family. Learn More...


John Jay McKelvey (May 24 1863 – October 19 1947) was an American author, attorney, and preservationist who set precedents in case law to stave off urban development of his Spuyten Duyvil community in The Bronx. The neighborhood had long been an enclave for the wealthy, and as the city grew around them residents of the neighborhood joined McKelvey in fighting threats to their park residence district. McKelvey used realty buyouts to protectively develop in such way that would save his picturesque tranquility. In the 20s he would bend so far as to develop idyllic garden apartment buildings like his visionary Villa Charlotte Brontë. Critics suggested that McKelvey's vision was driven by profit and oblivious to the needs of a growing city, although his projects also included the development of the Henry Hudson Monument and Edgehill Terraces. Learn More...


Robert Waterman Gardner (1866 - September 7, 1937) was an American architect noted for pioneering the use of reinforced concrete in residential architecture. He studied architecture with Calvert Vaux and Clarence Luce from 1887 to 1891, and was operating on his own as early as 1905. His 1909 partnership with John Jay McKelvey in developing the 'Along-the-Hudson-Park' in Spuyten Duyvil, New York gave him a broad canvas on which to put his design ideas in practice. Many of the single-family homes built there were made to his designs, and the collaboration would continue into the 1920s with the construction of McKelvey's Villa Rosa Bonheur and Villa Charlotte Bronte. He would become president of the New York Society of Craftsmen. Learn More...