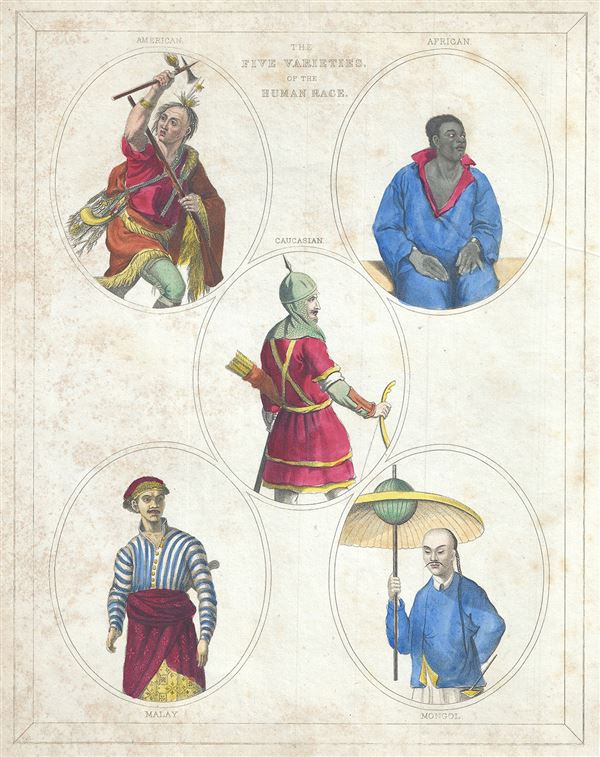 This is a fine example of the 1835 chart illustrating the five different varieties of the Human Race by the important American mapmaker T. G. Bradford. Bradford depicts the physical varieties of the human race by portraying differences in their physical appearance and native costumes, thus representing the different continents.

The Caucasian in the center is characterized by white skin and according to Bradford, this race has given birth to the most civilized nations of ancient and modern times, and has exhibited the moral and intellectual powers of human nature in their highest degree of perfection. The American variety, in the top left, is described to have dark and more or less red skin, black hair. The African race, top right, is described by Bradford to have black skin, black and wooly hair. The Mongolian race, bottom right, have olive yellow skin, thin and straight hair and a broad and flattened face. Bradford notes that the Chinese, belonging to this variety are by some thought to have been the most early civilized of all the nations of the world. The Malay race, bottom left, is described to have light tawny or deep brown skin and according to Bradford, some of the nations of this race have long possessed alphabets, and made considerable advances in civilization.

The map was published in Thomas G. Bradford's 1835 Comprehensive Atlas Geographical, Historical and Commercial.  Bradford's atlas, published in 1835 was an important work on many levels.  First, it was one of the first American atlases to follow an encyclopedic format, offering readers extensive geographical and statistical tables to supplement the maps themselves.  Second, it was published in Boston and influenced the city's rise as a publishing center later in the 19th century (at the time most publishing in the United States was restricted to New York and Philadelphia).  Third, this atlas was the first to contain a separate and specific map showing the Republic of Texas.  Fourth and finally, Bradford's atlas in some instances broke the Euro-centric mold regarding atlas production.  Among other things, Bradford focused his atlas on the Americas and abandoned the classical decoration common in European atlases in favor of a more informational and inherently American approach.